There are a few Common Blackbirds (Turdus merula) in our garden…  We notice them at dawn because of their mellow, melodious, warbling song.  It is just a delight.  What is not a delight is the mess they leave as they energetically sort through leaf litter and flick mulch out on our nice swept paths!  But regardless, they are the subject of our #28 Bird Photography Challenge. 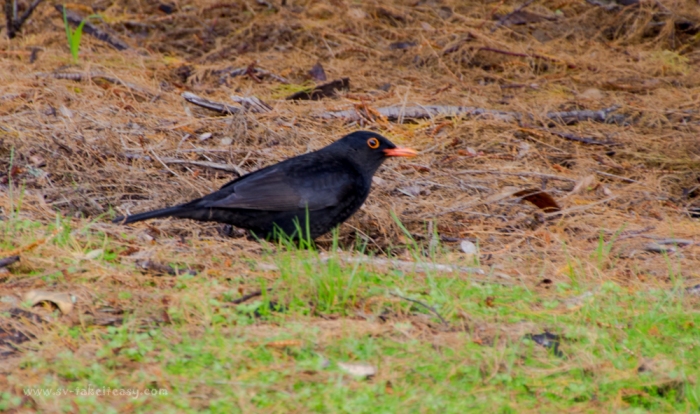 The male is glossy black with a deep orange or yellow bill, a narrow yellow eye ring and dark legs.  The female is brown with some streaks and has a dark bill and legs.  Average size is 25-28cms.

The Common Blackbird feeds on insects, worms, spiders and a range of seeds and fruit. It forages on the ground, probing and scratching at leaf litter.  It is easy to spot: a quick short run of a few meters, followed by an abrupt stop, it flicks its bill through the litter or mulch. Blackbirds mate for life.  The female builds a cup shaped nest and incubates the eggs.  Both sexes share in the feeding of the young. The bill’s appearance is important in the interactions of the Common Blackbird. The territory-holding male responds more aggressively towards blackbirds with orange bills than to those with yellow bills, and reacts least to the brown bill colour typical of the first-year male. As for the female, she is relatively indifferent to bill colour, but responds instead to shinier bills.

I found something quite intriguing about the Common Blackbird.  It is one of a number of species which has “unihemispheric slow-wave” sleep. What does that mean?  Well, one hemisphere of the brain is effectively asleep, while a low-voltage EEG, characteristic of wakefulness, is present in the other. The benefit of this is that the bird can rest in areas of high predation or during long migratory flights, but still retain a degree of alertness.

The Common Black Bird breeds in Europe, Asia and North Africa. It was introduced in Australia in the mid 1800s.  It was originally confined to Melbourne & Adelaide, but is gradually expanding its range to NSW and Tasmania.  It is considered a pest because it damages a variety of soft fruits in orchards, parks and gardens.  Most commonly found in urban areas and bushland habitats.  They have a preference for dense undergrowth. The Blackbird in the gallery was taken at Pertorbe Lake, Warrnambool, with a Canon 7Dii and a Tamron 18-270 lens.  Click on the first image to display the gallery in full screen slideshow. 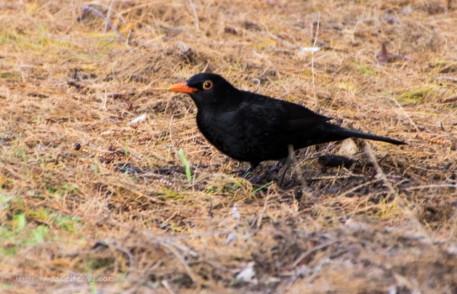