Of all the shore birds we come across, the Pied Oystercatcher (Haematopus longirostris) is one of our favourites, with its comical swagger and evocative piping call.  This shy bird is the bright subject of our #42 Bird Photography Challenge.

As the name suggests the Pied Oystercatcher is black and white.  The back, head and upper wings are black, while the belly and under-tail are white.  The plumage is striking, but what is particularly distinctive is its vivid red-orange bill, red eye and eye ring, and pinkish red legs and feet.  The bill is long: 5 to 8 cms.  This shorebird is 48 to 52 cm long. Although this is the Australian species, similar forms are found in most continents around the world. 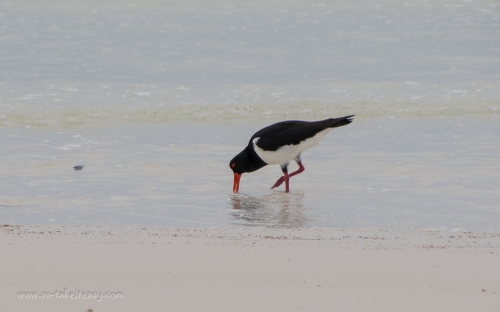 Being shy it seldom allows us to approach closely but we often see it probing the sand and mud with its long bill in search of crabs, molluscs and worms.  It particularly likes feeding on bi-valve molluscs, such as pipis, which it prizes open with its long chiseled beak. You can sometimes see it hammering at the shells. It also can feed on insects and worms.

We often observe the Oystercatchers in solitary pairs.  Nesting takes place in shallow scrapes on sand, or shell grit above the high water mark on beaches and sandbanks. The eggs are well camouflaged and both sexes share parenting duties.

The name “oystercatcher” is a bit of a misnomer for this species since they seldom eat oysters which are found on rocky coastlines, whereas Pied oystercatchers frequent sandy coastlines. So “pipi-catcher” might be more appropriate… although come to think about it, it would mean something rather different to the Frenchies!

The Pied Oystercatcher is found throughout the Australian coastal areas on mudflats, sandbanks and sandy ocean beaches.  Even though we often see these distinctive birds, their population has declined and they have been declared vulnerable in some parts of Australia, notably in NSW.  As is unfortunately often the case, disturbance of their habitat by human recreational activities, nest and chick predation by cats, dogs and foxes, and harvesting of pipis all have an adverse impact on the species.

The photos here were taken along the Fraser Island coast in Queensland and on the Freycinet coast in Tasmania.  Click on any image in the gallery to display in full screen slideshow. 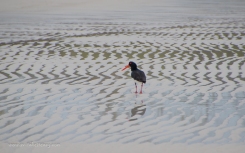 Beautiful Lena Reef at the start of the Ribbon Reefs.