You can hear it before you see it.  It is a big parrot, dark at a distance, but with bright yellow markings as it gets close. It is the spectacular Yellow-tailed Black Cockatoo and the subject of our #43 Bird Photography Challenge.

The Yellow-tailed Black Cockatoo (Calyptorhynchus funereus) is a large parrot native to the South East of Australia. It measures 55 to 65 cm in length with a short crest on the top of its head. It has distinctive markings: its plumage is mostly black with yellow cheek patches and a pale yellow tail band. When seen up close the body feathers are edged with yellow, giving a scalloped appearance.

You can easily distinguish the genders; the female (on left) has a bone coloured beak and grey eye ring and a bright yellow cheek patch, and the adult male (on right) has a black beak, red eye ring and less prominent cheek patch.

In flight this cockatoo has deep slow wing beats and a loud eerie wailing call. You see them flying in pairs or trios, or even small family groups.

The genus Calyptorhynchus is derived from the Greek words Calyptos, “hidden”, and Rhynchos, meaning “beak”, a reference to their sturdy but stumpy bill.  Funereus relates to its dark and sombre plumage, as if dressed for a funeral. The mood is definitely brightened when you see this beautiful cockatoo up close.

Female feasting on a pine cone

Wood boring grubs and seeds are the favourite food of the Yellow-tailed Black Cockatoo.  It prefers green cones from banksias, she-oaks and hakeas, but is also partial to pine cones as you can see in the photo. It nips the cone off at the stem and holds it in one foot, then systematically lifts each segment and extracts the seed. It keeps to the trees, only going to ground level to inspect fallen pine or banksia cones or to drink. The cockatoo is also fond of the larvae of tree boring beetles, gauging the larvae out and often damaging trees in the process. This does not endear it with orchard growers who see it as a pest when it descends on young trees, just like its cousin the Sulphur Crested Cockatoo.

This cockatoo nests in big isolated trees, mainly eucalyptus with large hollows, so it can fly to and from them unhindered.  The hollows can be one to two meters deep with a base of wood chips and gum leaves. Two eggs are laid. The female incubates them while the male supplies her with food. Once hatched, chicks are looked after by both parents for up to six months, but typically only one chick survives.

The Yellow-tailed Black Cockatoo is found in Central and Southern Queensland, New South Wales and into Victoria and South Australia. It frequents woodland, heathland and pine plantations. It is said that the average suitable tree for nesting is over 200 years old, which explains the increased scarcity of suitable habitat. This parrot is considered “secure” in most regions, although its numbers have reduced a lot. In the Eyre Peninsula (South Australia), it has been declared endangered.

The Yellow-tailed Black Cockatoos feed in small raucous and noisy flocks and often socialise before dusk, which is when we saw them recently. At Spermwhale Head in the Gippsland Lakes, there are a few pine trees and banksias on the point.  We were moored at the jetty and could hear their raucous calls whenever they were there, feasting on the pine cones. They are weary birds, but if you approach slowly, they let you take their portrait while they are busy eating. However if one of them gets spooked, it gives a screeching alarm call and the flock takes off. 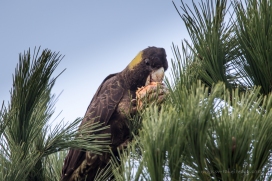 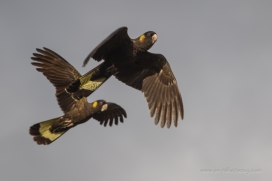 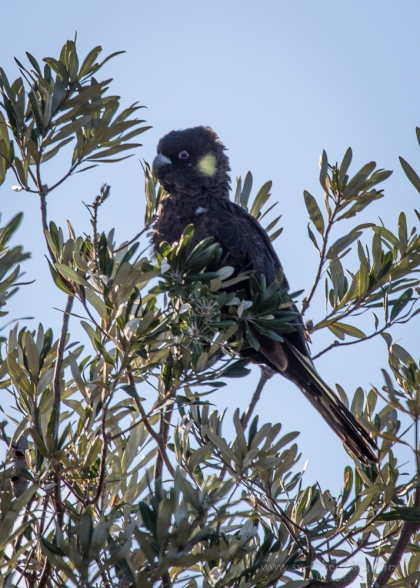 Feasting on a pine cone

Still on the Gold Coast, but exploring around the Tipplers Passage and Dux Anchorage. We are staying in the region for another few weeks as we have enrolled on a freediving course! ⁠