Just when you thought it was safe to get into the water, let us introduce you to the Aurelia aurita, commonly known as Moon jellyfish, a reference to its moon-like translucent bell.

For most people, jellyfish and the “ick-factor” go together, but to us, they are intriguing creatures. And you have to admit, these are rather eye-catching. You probably have seen these jellies, they are quite common in temperate and tropical coastal waters, harbours and estuaries. They float at the mercy of wind and current, and gather in quiet bays.  They vary in size – most of the ones we photographed were about 8 to 12 cm in diameter, but they can get as big as 40 cm!  They are very distinctive and quite beautiful with their translucent saucer and four bright pinkish horseshoe shapes in the centre, which, wait for it, are their gonads. 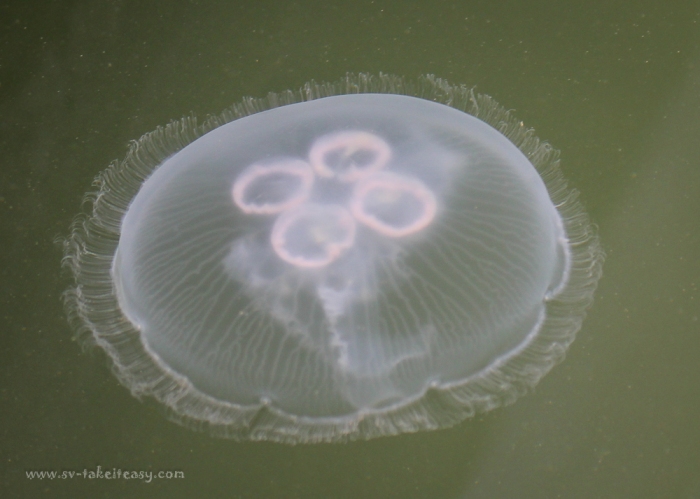 The Moon jellyfish is capable of only limited motion and drifts with the current, even when swimming.   Instead of long trailing tentacles, the outer edges of the saucer are fringed by short, fine cilia, and four stocky arms in the centre of the bell, which all help bring food to the mouth.

The adult medusa as well as the larvae of the moon jelly have nematocysts, stinging cells to capture prey such as small plankton organisms, and also protect themselves from predators, although this does not seem to deter fish, turtles, birds and even other larger medusae from eating them!  These jellies pose little threat to humans as far as their sting goes as it does not penetrate well through skin.  Still, with the number that had accumulated around our hulls in the Gippsland Lakes, we were not keen on jumping into the water with them. 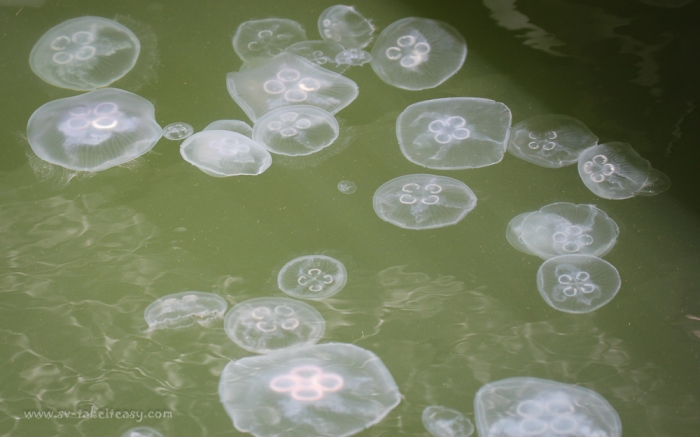 Where aurelia become a serious threat though is when huge quantities gather, inexorably taken by strong currents. They have an uncanny knack for getting stuck in pipes, on nets, against screens. They clog intakes of power stations cooling systems and desalination plants, and can inflict deadly damage to aquaculture farms.

Scientists have also discovered that many sea jellies thrive in dirty, polluted and oxygen-poor water, so increasingly large infestations are yet another sign of a troubled ocean.

Moon jellyfish might be boneless, brainless and heartless, but they are survivors.  They have been around for at least 565 million years.  They have not needed to change their body form or their lifestyle in all that time, so they are doing something right… and lately they seem to be doing a lot more of it than normal!

With my new found interest in all things jellies, I was glad to find these images in my photo library, taken at the Gippsland Lakes over a year ago with the old Canon 60D.   Click on the first image to display in full screen slide show. 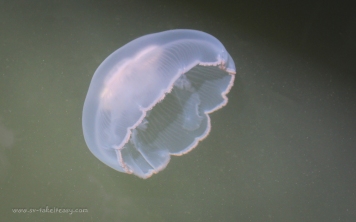 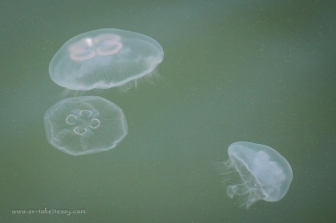 It is always fun to check out your anchorage and snorkeling options from the air. The gutters at Mast Head looked good and we spent a few days exploring and fishing there. Clear water, lots of fish, reasonable coral, the place to ourselves… can’t ask for more!