A shorebird that is well known for its gutsy behaviour in wide open places, the Masked Lapwing (Vanellus miles) certainly makes an impression.  With its raucous call and distinctive appearance, this plover is the unmistakable subject of our #57 Bird Photography Challenge.

The Masked Lapwing is a large ground-dwelling bird, which grows to about 36cm in length, with a wingspan of 75 to 85cms.  It is mainly white below, with a brown back and wings, a black crown and long pinkish red legs.  One of the distinctive features is the bright yellow wattle covering the face, reaching behind the eyes and hanging down beside the chin.  Another striking aspect is the thorny spurs that project from the wrist on each wing. These are visible in flight and give the bird an armed appearance, hence the scientific name “miles” which is derived from the Latin word for soldier.

There are two subspecies.  The Southern subspecies has black hind neck and sides of the breast and smaller facial wattles.  This is the one photographed here. The Northern subspecies is smaller, has much larger wattles, but lacks the partial black collar.

The Masked Lapwing feeds on grubs, insects and their larvae, and earth worms just below the surface. In the image here, you can see the dirt on the beak.  This lapwing had just been foraging on the ground.  Typically two birds are seen together, a male and a female, but they can also be seen in a small group during feeding.

The nest is often just a small depression in the ground on any stretch of open space.  Unlike other birds which look for a nesting place offering shelter and concealment, the Masked Lapwing finds a spot that seems to be as exposed as possible, probably so it can easily see any predator approaching.  This might also explain why it is notoriously aggressive when defending its nest. Adults will dive on intruders, including humans, and use a range of tactics such as pretending to have a broken wing, or fiercely protecting a non-existent nest, all in an attempt to lure the intruder away from their nesting site! They are always alert and have loud screeching ki-ki-ki-ki calls which can be heard at any time of day or night. They are particularly noisy at dusk or when alarmed.

In this image you can just see the yellow spurs. Lapwings use them when diving at potential predators or intruders during breeding season.  Although these attacks are quite unnerving, the birds seldom actually strike their ‘victims’, preferring a close swooping approach to scare them away.

The Masked Lapwing is widespread in northern, central and eastern Australia.  It can also be found in New Zealand, New Caledonia and New Guinea.  It loves walking along marshes, beaches and grasslands, even along roadside verges, playing fields, and almost anywhere with greenery and water. Although we often see them in urban areas, they are very wary of people and rarely allow close approach.

The images in this post were taken at the Western Wetlands and on the Torquay foreshore, using a Canon 7dII , a Canon 100-400mm lens, and in some also including the 1.4 extender. Click on any image to display the gallery in full screen slide show. 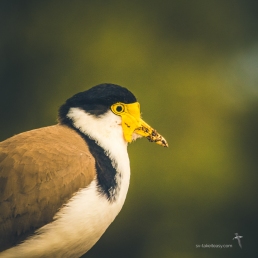 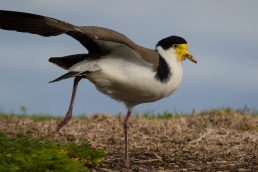