Perched on very long and fine reddish legs, the Black-Winged Stilt (Himantopus H lucocephalus) is an attractive pied shorebird with an elegant gait.  I fell in love at first sight with this eye-catching wader, which makes a graceful #14 Bird Photography Challenge.

The Black-Winged Stilt is a large black and white wading bird with very long and skinny reddish legs.  As the name suggests it has all black wings, an area of black plumage at the back of the neck and the upper back.  The underparts are white, sometimes with a pinkish wash on the breast.  It has a white collar, red iris and a straight black bill which is long and thin.   Its body averages 37cm in size, but the bird is tall and truly looks like it is walking on stilts!  The legs account for 60% of its height.  In flight they trail noticeably behind the tail.  The wingspan is about 75cms. 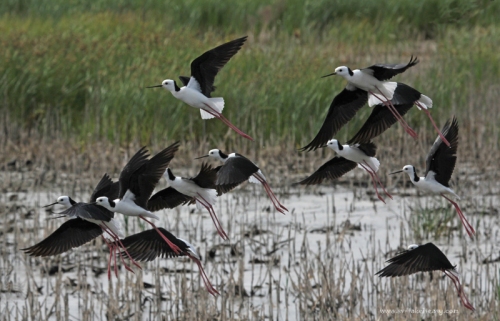 They have been spooked!

The Black-winged stilt is a social specie and is usually found in small colonies of 50 or so pairs as shown in the photo.  It is gregarious and may feed in large flocks of several thousands of birds on aquatic insects, molluscs and crustaceans.  It uses its sharp bill to peck at food items while wading in shallow water. It seizes prey on or near the surface.  Occasionally it plunges its head below the surface to catch small fish or to pull worms from the mud. Mated pairs defend their nest site and territory vigorously.  The nest is a shallow scrape on the ground or a mound near the water.  Both sexes incubate the eggs and look after the young.

In order to keep predators away from its unhatched eggs, a Black-Winged Stilt can pretend to be injured so it can lure them away.  The stilt may also make a sharp yapping sound and fly around frantically to distract any predators.

The Black-Winged Stilt is globally widespread.  Its range extends to Australia, Africa, Europe, Asia and even the United States.  Some populations are migratory and move to the coast in winter; those in warmer regions are generally resident or short-range vagrants.  Within Australia there is a seasonal migration of some birds north, out of Victoria in winter. The stilt frequents freshwater and salt water marshes, mud flats and the shallow edges of lakes and rivers.  The photos were taken at Lake Borrie Wetlands, which are part of Melbourne Waters, with a Canon 60D camera and 100-400 lens fully extended and hand held. Click on any image in the gallery to display in full screen. 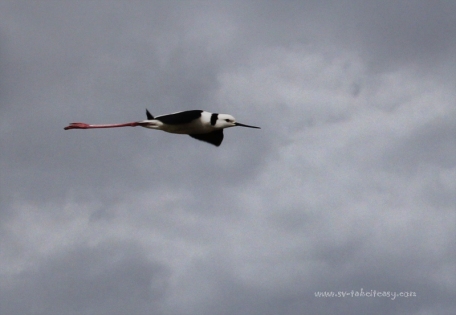 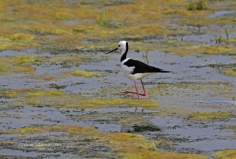 Wading through the marsh

They have been spooked!

Wading in the marshes

They are on the move!

Shining in the sunlight