It might be one of the most common of Australia’s waterbirds, but with its cute face and adept diving and flying skills, the Little Pied Cormorant (Microcarbo melanoleucos) takes pride of place as our #22 Bird Photography Challenge.

Drying its wings at Paynesville

The Little Pied Cormorant is entirely glossy black above and white below.  The head is predominantly white with a small crest and with black plumage to the crown, extending to the back of the neck.   The bill is short and yellow with a blunt hook in the upper mandible.  The tail is long, black and wedge shaped.  Its webbed feet and legs are black.  This is a small cormorant – 50 to 60cms – with a wingspan of 84 to 91cms.

The Little Pied Cormorant feeds on a variety of aquatic animals, shrimps, insects, crustaceans and fish.  These are caught by deep diving with both feet kicking outward in unison and the wings folded.  It finds its prey on the sea floor.  Dives can last from 15 to 20 seconds.  It catches fish crosswise, brings it to the surface, and flips it in the air to position it and swallow it head first. The Cormorant’s feathers don’t trap air like water resistant varieties, making it easier for it to dive and stay submerged while it chases fish.  Thus the feathers become waterlogged.  After being underwater for a while it spends time drying out and preening.  You can often see it standing on a log or rock, stretching out its wings to dry its feathers.

The Little Pied Cormorant breeds in colonies.  The nest is a flat platform of sticks in the fork of a tree, lined with green leaves.  Both adults share in egg incubation.

The Little Pied Cormorant has a nasal salt gland that allows it to fish in saltwater and flush out the salt it swallows.

At home in either fresh or salt water in Australasia, the Little Pied Cormorants are often seen in large flocks on the coast and on open waterways and estuaries, where fish are abundant, such as the Gippsland Lakes where these photos were taken. A few were taken using the Canon 60D and others with the 7Dii, and a Canon EF100-400 lens, hand held.

Click on any image in the gallery to display in full screen. 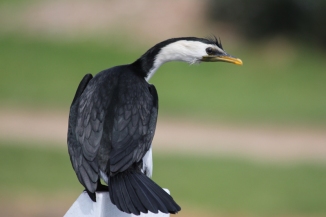 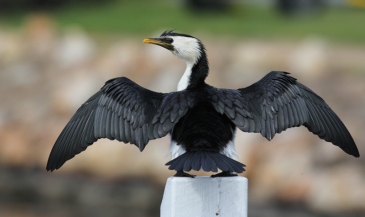 Drying its wings at Paynesville