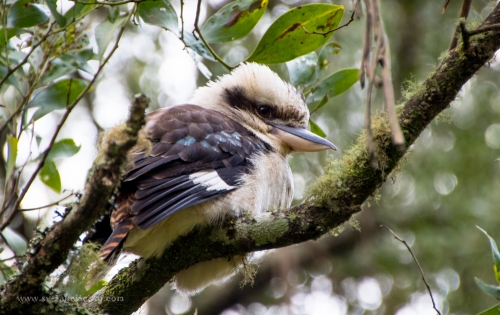 Well known for its loud calls sounding a bit like an echoing human laughter, the Kookaburra (Dacela novaeguineae) is instantly recognisable by its voice and plumage.  Its call is the quintessential sound of Australia and since we have heard its dawn chorus a few times in the morning with my family currently over from France, it seems appropriate to dedicate our #23 Bird Photography Challenge to the Laughing Kookaburra.

The Kookaburra is a terrestrial tree kingfisher, native to Australia and New Guinea. It grows to about 45cm in length, which makes it the largest kingfisher in the world.

This is quite a stocky bird.  The head is large and square; it has large brown eyes with excellent eyesight, a heavy bill nearly as long as its head, and a conspicuous brown eye stripe through the face.  This bird is well camouflaged.  It has off-white underparts, faintly barred with dark brown, the back is brown and the wings are brown with blue and white flecks.  The tail is rufous, broadly barred with black.  There are several types of Kookaburra, but the one featured here is the Laughing Kookaburra.

This is a carnivorous bird who feeds on mice, snakes, insects and small reptiles, even on the young of other birds.  The more social birds will accept handouts from humans and they will swoop on your barbecue and take your saussages or meat readily.

Prey is seized by launching from a perch.  Small prey is eaten whole, larger prey is killed by bashing it against the ground or a tree branch.  This bashing behaviour has resulted in the kookaburra having very strong neck muscles.

The Kookaburra pairs for life.  The nest is generally in a tree hollow.  Both sexes share in the incubation and tending to the young.

The word kookaburra comes from Wiradjuri Aborigine word guuguubarra. The word was derived from the sound the bird makes.  The kookaburra’s call is usually heard at dawn and dusk but it may also be heard at any time of the day. It starts off as a slow chuckle ‘oooo’ and then builds up to boisterous laughter ‘ha ha ha’. This is a territorial call to establish the territory of the family unit. Researchers have found that may also vocalise together like a chorus to amplify their claims to their territory.

Where does it live?

The Laughing Kookaburra is found in forests, open woodlands as well as in suburban areas with tall trees or near running water. It is found throughout Eastern Australia.  Being a territorial and sedentary bird, it marks its territory and stays there year after year.

The images in the gallery were taken at the Otways forest at the back of Lorne, in Victoria, using a Canon 7Dii and Tamron 18-270 lens.  This kookaburra was perched on a branch and I noticed it prior to going on a bush walk along the Henderson Waterfalls.  It was still there two hours later!  This week we saw another beautiful kookaburra on Fraser Island, in the rainforest at Central Station.  We couldn’t resist adding him to the collection. 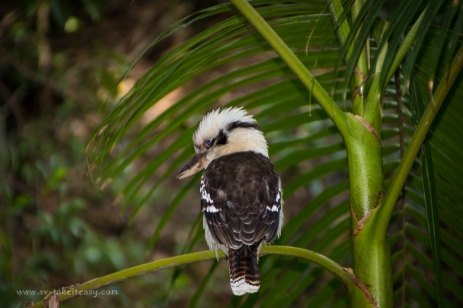 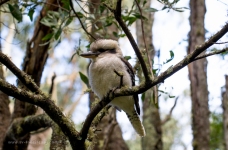 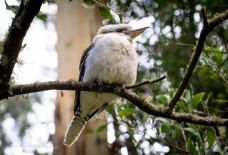 Anui The Dangling One at the Mackay shipyard! We are high and dry and the hard work has started! ⁠