The Hoary-headed Grebe (Poliocephalus poliocephalus) gets its name from the silvery-white streaking on its dark head.  Although common, it is easily alarmed and dives out of sight if any danger approaches.  This together with its small size makes it a tricky subject to photograph, just perfect for our #59 Bird Photography Challenge. 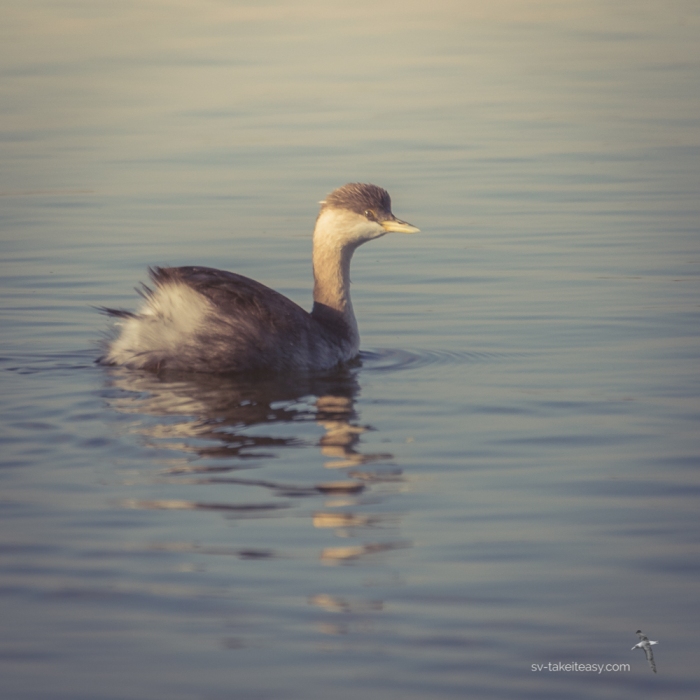 The Hoary-headed Grebe is a small dark grey and white grebe, about 30 cms long. It has a dark crown and a narrow dark streak down the back of the neck which makes it easy to identify.  It also has a black patch under the chin.  During the breeding season the adult’s plumage has white streaks over its entire head, hence the name ‘hoary’.  This is a tiny grebe, with a wedge shaped bill and fluffy white downy rear.

This grebe floats high on the water, but when alarmed it quickly dives under water or patters along the surface with its short legs beating fast.  It is not a good flyer and will go only short distances and very low to the water to escape danger, as an alternative to diving.

Feeding on the surface

This grebe feeds during the day on aquatic invertebrates which it gets by deep diving.  It also catches insects and forages at the water surface as shown in the photo.

Being quite shy, it constructs a nest well offshore in the shallows amongst floating reeds and weeds. The nest floats and is attached to sedges or a fallen branch.  Both parents take part in the incubation of the eggs.

Hoary-headed Grebes often nest in simple pairs, but sometimes they form colonies of hundreds of floating nests which may be joined together to form a large raft.

The Hoary-headed Grebe is endemic to Australia.  It can be found anywhere on the continent where there is surface water, and it breeds in the southern parts of Australia and Tasmania. It is usually found away from the shoreline in large open waters such as estuaries, swamps and lakes.

All images in the gallery were taken at the Lake Borrie Wetlands with a Canon 7dii, 100-400mm lens and a 1.4 extender. Click on any image in the gallery to display in full screen. 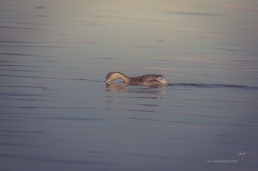 Feeding at the surface