With Wade on a yacht delivery for the whole of May, I had to keep myself occupied on weekends in between consulting work interstate or the loneliness would hit me. On one of those weekends I had a plan: go to our Jan Juc house, get up super early and drive for two hours down to the Port Campbell National Park, to get there at sunrise and at low tide, before the hordes of tourists turn up. This part of the Victorian coast is world famous for its extraordinary collection of wave-sculpted rock formations.  It is an inhospitable but spectacular area aptly named the Shipwreck Coast and features an array of sheer cliffs overlooking offshore islets, rock stacks, gorges, arches, and blow-holes.

I would love to explore along there from the ocean rather than the road, although I wonder if we would dare approach these forbidding shores in Take It Easy.  Explorer Matthew Flinders said of the Shipwreck Coast: “I have seldom seen a more fearful section of coastline. It is on the wish list anyway.

With this most photographed stretch of the Great Ocean Road, it is hard to be original but yet I wanted to give my own take on these iconic seascapes. I especially wanted to make images that spoke of how it felt to be there alone. Most of the images I took were long exposures with Lee Filters.  I was there from dawn and the feeling of standing on my own, particularly at Gibson Steps, was one of calmness. No people, no wild surf, just a tranquil mood.  Those were precious moments because they are so rare along that stretch of coast. It got busier during the morning, and brighter as the sun appeared, and the gentleness was replaced by a sense of awe at the power of the wind and waves which shaped this wild coast. Here is a gallery of my favourites.

Iconic Twelve Apostles – there are now only eight. 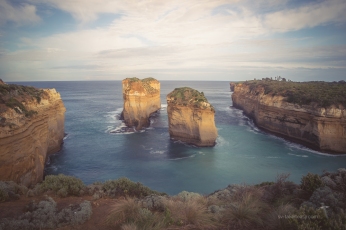 Loch Ard Gorge – the two stacks in the centre are once formed an arch.

Sea Stack at the Bluff walk

27 thoughts on “Alone on the Shipwreck Coast”