An unmistakable parrot with its bright colourful plumage, the Rainbow Lorikeet (Trichoglossus haematodus) is an engaging bird: active, noisy, conspicuous, even belligerent. This palette of colour is the dazzling subject for our #5 Bird Photography Challenge.

Settled in a eucalyptus

The Rainbow Lorikeet is a medium size parrot, 25 to 30 cm long, including the tail. True to its name, just about all colours of the rainbow are present in its plumage.  The head is deep blue and the neck collar is greenish-yellow.  The rest of the upper parts (wings, back and tail) are deep green.  The chest is red-orange, shading to yellow on the flanks.  The belly is blue, the thighs and rump are green.  As if this was not colourful enough, the downward curving beak is scarlet, the eyes are black with a red eye-ring.  It really is a stunning parrot. 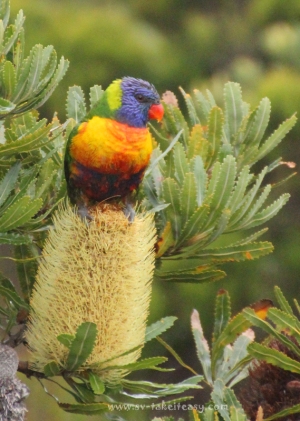 Perched on a banksia flower

This is a fast flying bird, with rapid shallow wing beats. it would have been wonderful to capture an image of it aloft, but it is just too swift!  Rainbow Lorikeets often travel in pairs.  They occasionally respond to calls to fly as a flock, but then disperse again into pairs.  They aggressively defend their feeding territory and nesting areas, chasing off other birds from flowers they fancy, as shown in the featured image. The Lorikeet nests in the hollow limb of tall trees such as eucalyptus.

70% of the Rainbow Lorikeet’s time is spent feeding, mainly on fruit, pollen and nectar.  It can use its feet like hands to manipulate food.  The arrangement of toes and use of the bill, make it an acrobatic feeder which can sometimes be seen hanging upside down reaching for gum blossoms.  There is often noisy chatter while feeding.

The Rainbow Lorikeet possesses a tongue adapted especially for its diet. The end of the tongue has hairy projections – papillae – which gather pollen and nectar from flowers.

The Rainbow Lorikeet is an Australasian parrot, which can be found not only in Australia, but also in PNG, Indonesia, New Caledonia, the Solomon Islands and Vanuatu.  In Australia it is common along the Eastern Seaboard, to South Australia and Tasmania.  It favours rainforest, coastal bush and woodland, and even well treed urban areas.

The photos were taken at Rotamah Island, in the Gippsland Lakes,  using a Canon 60D camera and EF100-400 lens, and between Bittangabee Bay and Green Cape in NSW, with a Tamron 18-270 lens.  Click on any photo in the gallery to display in full screen.

Portrait of a Rainbow

A little soggy after the rain! 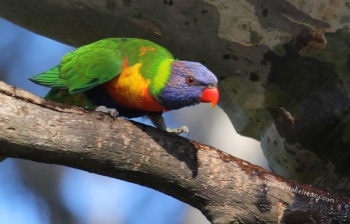 Turned away to display its beautiful green back 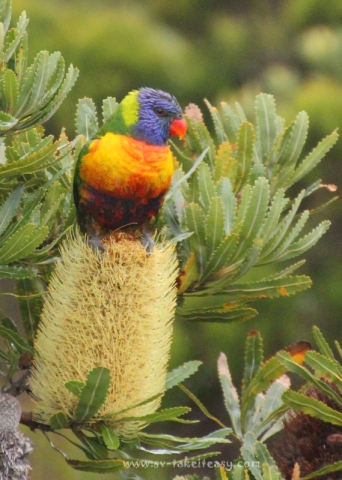 Perched on a banksia flower

Get away from my tree!

Settled in a eucalyptus

I can see you from the corner of my eye! – taken at Rotamah Island, Gippsland Lakes