Our NSW tribulations in December-January brought us to discover new anchorages and revisit favourite ones.  We compiled an article on our top “10 unexpected gems of the NSW Coast“.  The article has been published in the April issue of yachting magazine Cruising Helmsman.  We are very chuffed especially since the editor, Phil Ross, was expecting a “return to Lord Howe” story and I was not sure he would be happy with the change of plan! 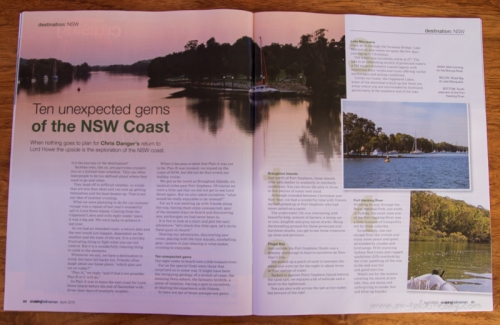 The other thing Wade is rather pleased about it that the photo of him walking along the deck while we are under sail not only made front cover in February, but is being used to promote the Cruising Helmsman magazine this month, and probably will be used again in forthcoming issues!  So Mr Cover Boy appears in April again… and in two spots!  Phil obviously really liked that picture.  Wade now thinks he is a “star” and wants fame, fortune, adulation, and women all over the world going “awh”!  Actually, correction… He wants them to throw their bodies at him!   Ah ah, like he’d know what to do😀!  I have to do something about bringing Captain Wadie back to reality… 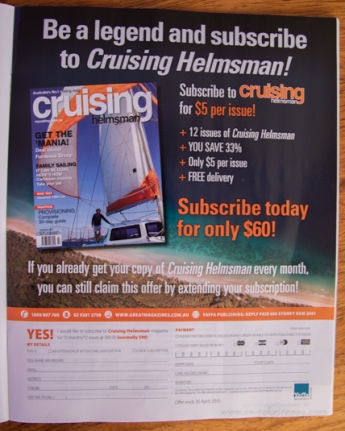 You can view or download “10 unexpected gems of the NSW Coast” by going to the ‘Published’ page of our website, under the Destinations section.  Happy reading!

12 thoughts on “Published in the April Cruising Helmsman!”

Having a lot of fun experimenting with the drone along the ocean beach at South Stradbroke Island. The Little Planet effect is spacy, but if you look at the next aerial images you will see our surroundings: the ocean beach looking towards Jumpinpin, Dux Anchorage inside Tipplers Passage where Anui is, and the beach for a quick body surf!