It is really amazing what can be done in the “digital dark room”  these days.  Every time I embark on an photo processing exercise, I learn new things and it is what makes these projects so worthwhile.  So I am taking part again in the monthly “One Photo Focus” challenge, hosted by Stacy Fischer at Visual Venturing.  As the name suggests, all participants work on a single image and put their own interpretation. 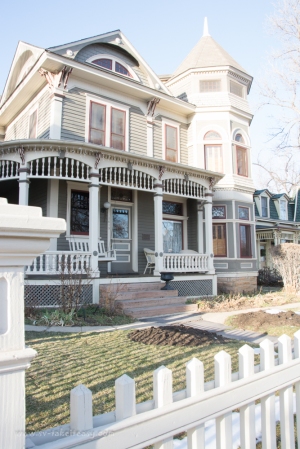 This month the image we are all working on is by Stacy herself.  In her words it is “a very overexposed photograph of the Mork & Mindy house in Boulder, Colorado.”  The original unprocessed RAW image is on the left.

For those not familiar with “Mork & Mindy” it was an American sitcom that ran from 1978-1982.  Mork was an alien from the planet Ork and was sent to Earth to study human behaviour.  Mindy was his human friend and room mate.  Mork was played by Robin Williams and this landmark property became a memorial for him upon his tragic death in August 2014.

Summary of my editing process 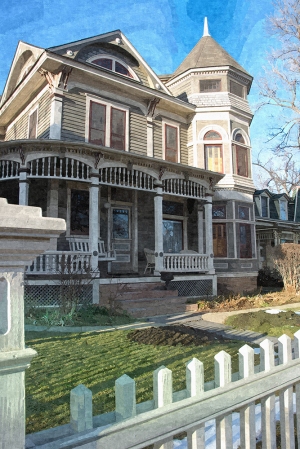 I imported the image into Photoshop and did the following:

I then brought the edited image into Foto Sketcher for the next steps:

Back in PS, resized and saved the image.

I am quite happy with the result.  The image has texture and good colour, and the graduation in the sky has brought nice patterns and added interest.  This was a good exercise in ‘recovering’ an image which might otherwise have been destined for the trash can.  So thank you Stacy for letting us play with your photograph.  And “nanu nanu” to all earthlings!

Do take the opportunity to head over to Visual Venturing for this June One Photo Focus challenge and check out other participants’ creative efforts.  There are sure to be some very different interpretations.