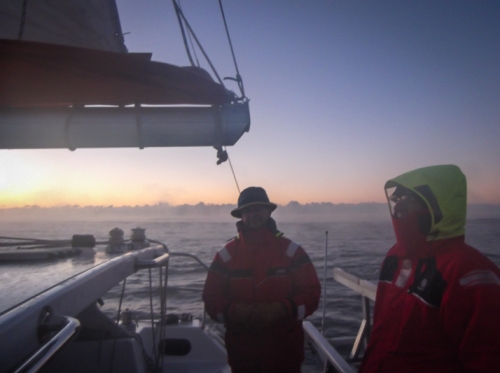 5.30 am on Monday, Marine Traffic issues an email to announce Take It Easy is leaving the port of Eden!  Wow, early start!

Wade is keen to make progress northward, and in light northerly conditions, he is prepared to motor.  So off they go, motor-sailing all the way to the small fishing harbour of Bermagui.  Marine Traffic might have seen them leave Eden, but TIE slipped under the radar for this leg of the trip and arrived at Bermy incognito!

They are now rafted up to another yacht along the fishing jetty.  This is the thing with Bermagui – it’s a very tight spot.  There is no space to anchor or moor, and chances are, if you are a visiting yacht, you get to raft up to another vessel.  If you are lucky it’s a yacht, if you are less so it’s a smelly fishing boat that will leave port at some ungodly hour the next morning!  Being light at only 4.5 tons, we get to raft onto the steel boats rather than them onto us and risk crushing poor TIE!  But for your trouble and $30 a night, you have power and water at will, and you get to be a wally with the hot water showers at the Fishing Coop, which is a rather welcome luxury in the middle of winter!

The crew sailed in a cold but sunshiny day.  Along the way they saw whales and dolphins, and caught two bonitos on the trawling line, a mackerel-looking fish.  Bonito means pretty in Spanish and it is indeed a pretty fish, and rather tasty too.  Those fluffy lures are working a treat and on the strength of that, Wade is buying a few more!  Bengie was rather excited by the preparation of the fishes… some tasty morsels for our ship’s cat.  And the guys enjoyed a fresh feed for a couple of nights instead of having to break into the frozos!

Take It Easy stayed put in Bermagui on Tuesday.  For their day off, they got to do a few chores like a load of washing, fuel and water top up and the servicing of the outboards, all this on a brilliant sunny day and 18º!  Wait till they get back out to sea…  no more T shirts for a while!   They are heading off on Wednesday, initially under motor, then the wind is due to switch back to the South for quite a few days, allowing the guys to resume their sail up the coast.

I got a nice surprise in my Dropbox: a set of images taken by official photographer Merv.  So here is a selection to show you what life is like on board and to reinforce that winter sailing is a chilly affair! 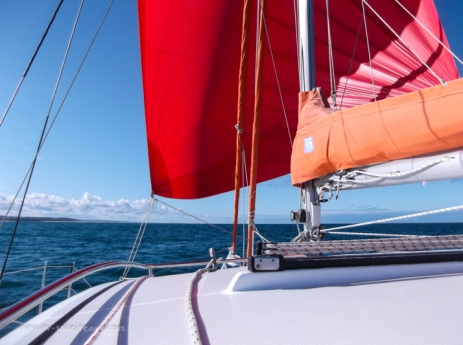 Happy sailing in the sunshine 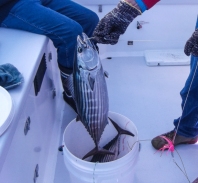 Rafted up at Bermagui

8 thoughts on “Winter sailing is a chilly affair!”