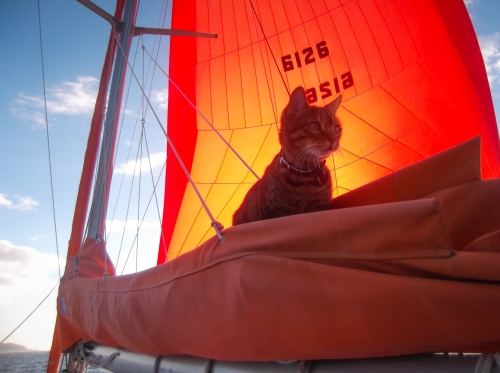 Bengie, in the sail bag, – full speed under spinnaker – she’s got her sea legs!

What a difference a 12 hour sleep makes!  The Take It Easy crew is a bit more chirpy and rested, feeling up to another overnighter!  At 7am on Saturday, they left Crowdy Head and headed out again by a bright sunny day and calm seas: spinnaker up!  Even Bengie felt brave enough to get out on deck!

Once again, they will keep going for 30 to 34 hours, until probably Ballina or Byron Bay on Sunday night!  They were level with Wooli at 7am this morning. So plenty of smooth sailing!

However it appears you can’t be at sea for very long without yet another challenge!  They had been going for a while on Saturday, but noticed that George, the autopilot, was not keeping them on their heading – in fact he seemed to have a particular attraction for a headland.  No amount of correcting seemed to work.  So down comes the spinnaker, and on go the engines… “gee, it’s hard to steer”!  Wade decides to stop the boat and jump overboard to investigate.  To his dismay he finds one rudder missing – gone – sunk – what the …?  It seems that our sin of last summer, when we hit a rock at Jibbon Beach with the port rudder and bent its shaft, is still coming back to haunt us.  We got the steel shaft straightened, but it must have been weakened in the process and with the efforts of the past week’s sailing, it snapped and the rudder disappeared in the big briny. After the initial shock, they resumed sailing, however it is now really important to keep the sails balanced for George not to lock up and go on strike!

Wade has got hold of Peter Snell, the Easy catamaran designer and builder of Take It Easy,  who is now on the job to make a replacement rudder.  He happens to live in Caboolture, North of Brisbane.  So guess where the guys are going to spend a few days next week?  Minor detour!  But “she’ll be right, mate!”

We have great pictures to share with you, thanks to Merv and I think you will all agree he has done a superb job.  Click on the first image to display the gallery in full screen slide show. 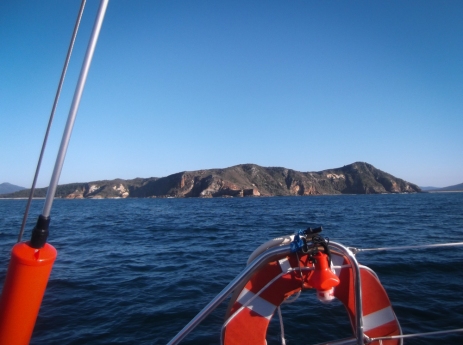 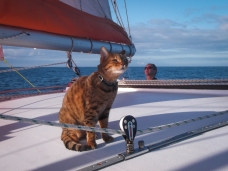 What’s going on up the mast?

Cat on a cat – in the sail bag, full speed under spinnaker – she’s got her sea legs! 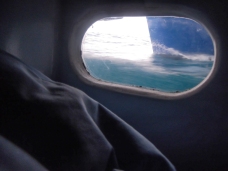 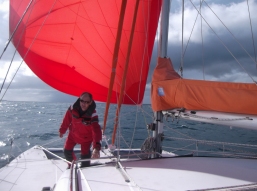 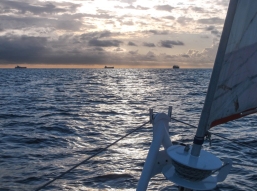 Newcastle and the circling ships

Merv and his first bonito!

Mike on the filleting job on the sugar scoops!

Mike at the start of the trip!

22 thoughts on “Smooth sailing… till the next challenge!”