Our third post in the Sea Mammals Series is dedicated to Australian Fur Seals.  These are rowdy, noisy, inquisitive and fun animals to watch. They are found mainly in Bass Strait.  We have seen them in Victoria, on islands off Wilson’s Promontory and in Tasmania at Judgement Rocks which are part of the Kent Group of islands.  They favour rock slopes, ledges, reefs and caves which are perfect for slithering in and out of the water.

As you approach by boat, the seals bellow and sound like a mix of dog, cattle, and sheep.  They roar, grunt, bark, and honk.  They assemble in large numbers and you will see big white patches decorating the rock slabs, where their guano accumulates. Watch out when you get on the lee side of the islets – the stench is unbelievably bad!  Big males dominate at the very top of the rock slabs, keeping a watchful eye on their harem of up to 40 females.

On land the seals’ movement is awkward.  They use their front flippers in a variety of gaits and sways to move at speeds from a slow waddle to a fast gallop.  And then there are the belly slides down the sloping slabs into the water which are hilarious to watch, but can easily turn into a stampede.

Through the water, fur seals move effortlessly and are superb swimmers.  They can dive to 150 metres in search of fish, squid, octopus and crustaceans.  But before jumping in with them to join the fun, note that they are large carnivorous animals with big teeth.  Females can weigh 50 to 120kgs and the big males, also called bulls, can weigh 220 to 360kgs.

Now protected, seals were hunted for their fur to near extinction in the 19th century.  The population has rebounded now and is estimated at between 60,000 and 80,000 animals, but it was ¾ of a million prior to the exploitation of the sealing industry.

Here is a gallery of images taken from the deck of Take It Easy during various sailing escapades.

Click on the first image to display in full screen. 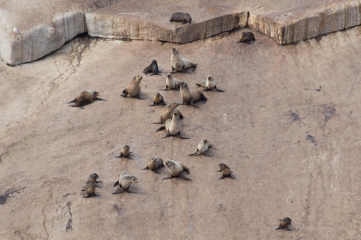 On the big slab at Kanowna Island

Having fun at Judgement Rocks

Checking us out at Judgement Rocks

Big Rock and hundreds of seals

Our happy place: at the reef on a calm and sunny day, anchored in clear sand, the place to ourselves... enough said!⁠⁠