With its fragile, slender appearance, and its prominently up-curved bill, the Red-necked Avocet (Recurvirostra novaehollandiae) is an elegant and distinctive Australian wader, and the subject of our #36 Bird Photography Challenge. 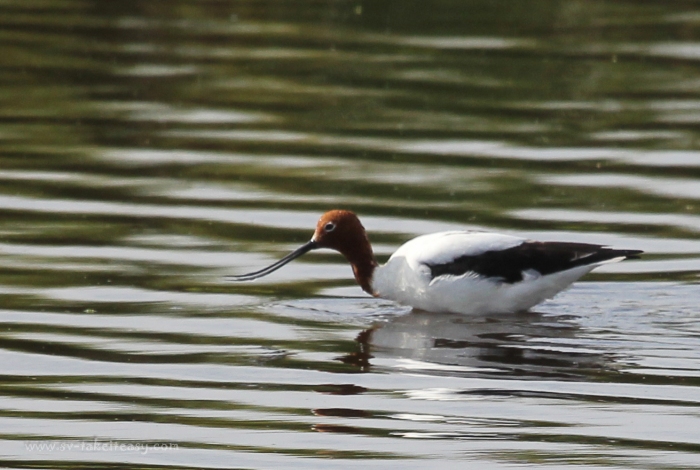 The Red-necked Avocet is closely related to the stilt, but differentiated from other species by its colouration.  It has a chesnut brown head and neck with a white eye ring and a long slender bill that is curved upward. The rest of the plumage is pied: the body is white, with two black streaks along the back, and the wings are white with black wing bars and black tips.  Its long and thin legs are greyish blue.  This avocet is about 45cm long from head to tail, with a wingspan of around 75cm.  Male and female look alike, but the male’s bill is more curved.

The Red-necked Avocet is a wader which feeds by foraging in the waters of shallow wetlands. It sweeps its bill back and forth through the water in a scything motion, to catch tiny aquatic invertebrates, such as crustaceans, insects and their larvae.  It sometimes upend to reach prey in deeper water.  It breeds in loose colonies. Nests are shallow scrapes lined with water vegetation.  Pairs mate for only a season.  It can be seen associating with other stilts, such as the black-winged stilt or banded stilt.

Due to its relatively large size, it has few predators, but in order to avoid foxes or feral cats, the Red-necked Avocet can sometimes pretend to have a broken or injured limb in order to lure prey away from vulnerable chicks.

In a large colony the Avocets can be aggresively diffensive and highly territorial.  They chase off other species of birds that try to nest near them such as ducks. This behaviour has lead to some birdwatchers giving them the nick name Avocet Exocet.

Where does it live?

An Australian native, the Red-necked Avocet is found in throughout the mainland, but primarily in the South East of the country.  It frequents salt and freshwater estuaries, wetlands and tidal flats. It is highly nomadic with its range dependent on weather conditions.  After substantial inland rainfalls it can disperse throughout the continent with the exception of the more arid parts.

The photos in the gallery were taken at the Lake Borrie Wetlands near Melbourne with a Canon 7Dii and 100-400mm lens, hand held. 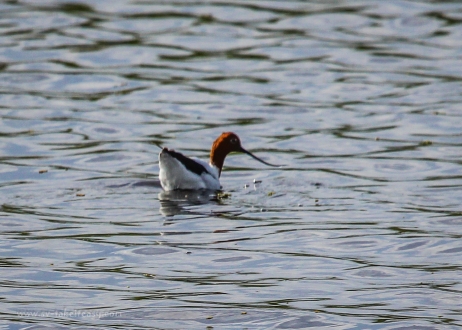 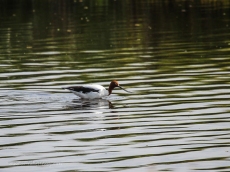