After being in the Tasmanian wilderness for weeks you have mixed feelings about returning to so-called civilisation. On one hand you want to experience more of these primal places where the weather dictates your life and you feel totally in awe of nature. On the other hand you yearn for ‘normality’, creature comforts and less effort. 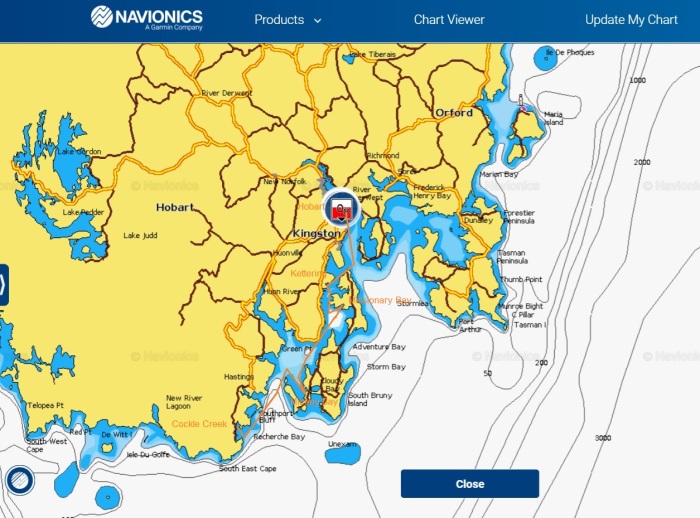 D’Entrecasteaux Channel from Recherche to Hobart

As we sailed up the D’Entrecasteaux Channel, settlements were reappearing in gentler, more pastoral landscape. The D’Entrecasteaux Channel is a body of water between the southeast of mainland Tasmania and Bruny Island. It is also the mouth for the estuaries of the Derwent and Huon rivers. We enjoyed a couple of lovely anchorages on the Bruny Island side of the Channel, a gradual way of coming back to more populated areas. 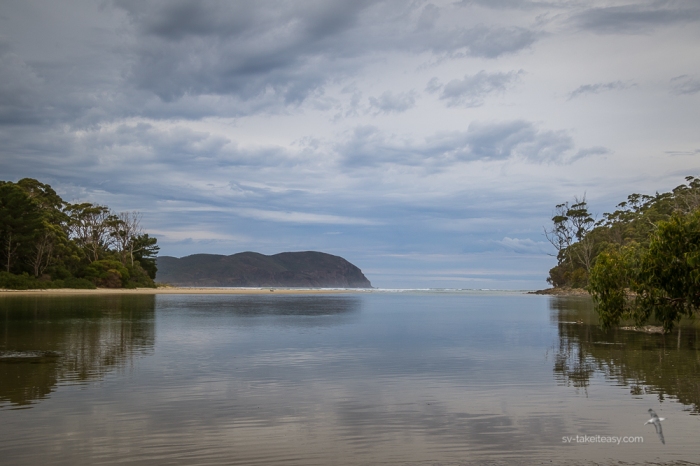 But the closer we got to Hobart the more people, boats, and crowded bays there were, where manoeuvring a cat gets a bit difficult and stressful. Just look at the image of Kettering!

Kettering and its forest of masts!

Although we love the wilderness, it has been great to come to Hobart, all the way into Constitution Dock, to take an overdue and well earned breather. Our friends Greg and Ann left a week ago and returned to Melbourne. We have got back into our normal rhythm on the boat, just us two and Bengie and it feels good, if a little odd after 7 weeks with company.

Take It Easy in Constitution Dock – the bridge on the right opened to let us through… Narrow!

Greg actually recorded our slow entry into the Dock. Here is a link to the video he made: I was the one at the wheel, while Wade was checking I was not going to hit anything! We had to stick to one side of the wharf so as not to have our mast hit the bridge, which does not lift all the way up vertically! A big thank you to our camera man.

And here we are, all tied up and settled – Phew!

Take It Easy  all settled at Constitution Dock

We have caught up with friends, family, other yachties and blog followers, enjoyed a few tasty meals at restaurants, have taken very long hot showers without counting the seconds! We have splurged on fresh food, have visited a few interesting museums, and done the tourist’s thing in Hobart. The harbour in particular is vibrant and active. 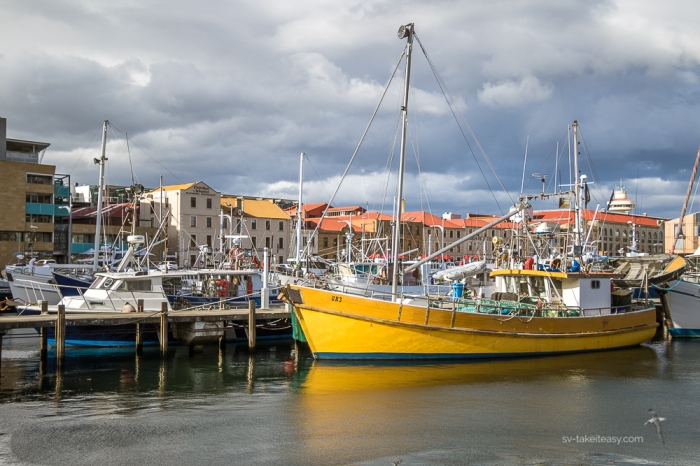 Don’t bright colours look great? One of the fishing boats at Victoria Dock

it has not been the warmest of times here and we are glad we were able to plug in our heater while moored at the dock! We could not believe it last Sunday and again Tuesday when the sky cleared after much rain and cold temperatures during the night: snow on Mt Wellington. It is not even Winter!  So it goes without saying that we are now on a mission to head towards warmer climes. Take It Easy is reprovisioned, all tidied up and ready to go.

We left Hobart on Wednesday 18th April and are now heading north. We are still in beautiful Tassie for a few days and in our next post we hope to show you that the East coast of Tasmania is just as breathtaking as the wild West side!

23 thoughts on “Back to civilisation”

It is always fun to check out your anchorage and snorkeling options from the air. The gutters at Mast Head looked good and we spent a few days exploring and fishing there. Clear water, lots of fish, reasonable coral, the place to ourselves… can’t ask for more!