Getting the work done on Anui is a demanding time. As usual with boating maintenance, things end up taking longer than planned, unexpected discoveries throw up challenges and we will end up staying in the wet berth at The Boat Works for 10 days, not 5. Costs build, but we are locked in and just have to bite the bullet. So what have we tackled to date? Well we have not been slacking off even if most of the work is coordination rather than actual doing by us.

The boat had been completely repainted about 1.5 years ago by Joel Weymouth at Fairspray Marine Finishing. But no boat enjoys being on the hard for that long, baking in the hot sun. Blisters in the blue developed and surface cracks  formed in the white on the topsides, which had to be sanded back and touched up. Anui looked a bit spotty for a while.

Beyond the touch ups that were agreed in the settlement, we got Joel to fix every little fisssure, chip on the deck and in the cockpit at our expense. Every fine crack in the paint has the potential to create an area of delamination down the track, so it is best to address things now before anything nasty develops.

And while we are on the subject of delamination, the survey uncovered an area of it near one of the daggerboards. This is being fixed up by our shipwright, Ryan, at 143 Boat Building, which involves grinding the spot down, bogging it, reglassing and repainting. It is not hard, but it takes time.

The worst thing is the amount of fibreglass dust flying around. It gets into everything and we feel so itchy! We don’t know how the shipwright’s apprentice copes with working with this day in day out. We will have to wash everything inside the cabin once it’s all done as the dust gets aboslutely everywhere!

Rot in the anchor locker

The edges of the anchor locker were made in wood to simplify the process of getting a lip in the hatch and rounded corners. It is easier to do this with a wood base rather than a foam base. Unfortunately, somehow water got in and the lip of the locker rotted. The bad stuff had to be dug out…  It was ugly, as we had to chase the rot till we got back to the foam core, a lot further than we expected.

After a scary couple of days, Ryan our shipwright is now reconstructing rather than destroying. Phew! We have lived through dealing with rot on our last two boats and know the drill: get back to healthy wood, seal it, put new healthy timber in and glass it, then repaint. But we had not expected this on a foam core and fibreglass construction!

We got stainless steel rubbing strips made and installed by Choice Stainless Steel, to protect the edge of the deck from mooring ropes chafe. This went smoothly and we now have three of these steel strips on each side.

While we were at it, we got two aluminium reinforcement plates made to fit underneath the mainsheet pullies and beef up the mountings in an area of high load, a suggestion from the Surveyor. 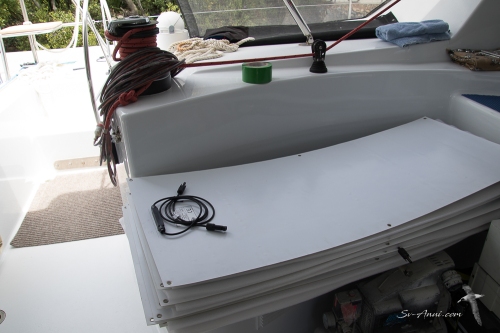 The existing slimline flexible solar panels were not producing as much power as they should and we agreed with Scott, the previous owner, he would supply new panels if we took care of their installation. This meant us removing the existing ones and sticking the new ones on, but of course the electrical switches did not fit in the same spot as the old ones. Some crafty adjustments had to be made. We got an electrician to oversee the connection. The photo here shows the 8 x 130 watts panels face down, ready to be mounted. 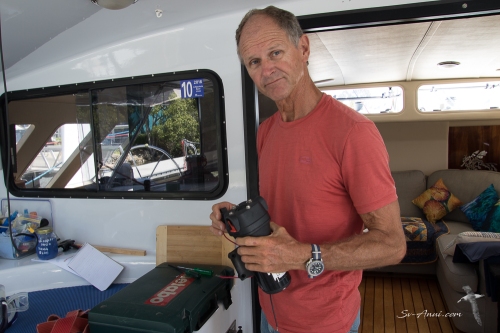 The fresh water pump decided to die and we had to buy a new one and install it. On the very same day we wanted water to come in on Anui, we had to deal with a broken seacock on Take It Easy and needed to keep the water out, all this just before showing her to a potential buyer! It is now fixed, but what a drama. Nerves were very frazzled on that day!

A few days later, a bit of research on the net revealed the water pump bit that was defective on Anui was the pressure switch, a cheap part to replace. So we now have purchased that and have a spare pump for when the next pump drama occurs!

While we were out sailing over Christmas/New Year and had two reefs in the main because of strong conditions, we managed to break a tab on the first reefing point. We are getting that re-stitched by Gold Coast Sailmakers who made the screecher, which unfortunately meant we had to get the mainsail off the boat… a big heavy job. We will get some advice on the state of wear of the mainsail as well. It is the original sail and it may be time to think of getting a new one made.

The sailmaker also makes protective tube covers for the dinghy. We are getting that done to lengthen the life of the tender. Although our tender has full covers, these are awkward to put on when the dinghy is hung from the davits and we end up not fitting them on for daily use. So covers that permanently stay on are the way to go. 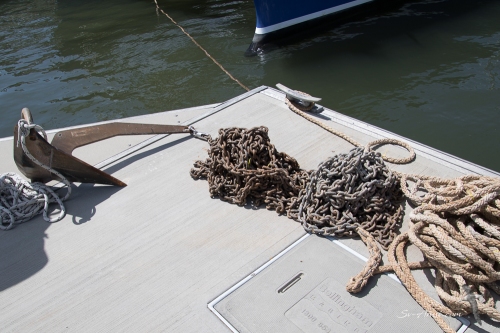 While the anchor locker is getting repaired and we have the chain piled up on the jetty, we have discovered we only have 50m of 10mm chain, not 65m as per the boat specs. Given the size of the boat, we figure we need at least 80m. Adding the extra length via a joining link is not recommended. We debated how much to get, but have ended up ordering 100m of chain.

And finally, the antique computer that was running an out of date charting software has died. It was firing up when it felt like it, but now it has expired! So we are going to get new charting software – Time Zero – which will be loaded on Wade’s laptop and will eventually talk to the NKE navigation system. But for now, it will run independently from the navigation software. One thing is certain, the old XP will get a burial in the local rubbish bin!

Light at the end of the tunnel

If it all sounds like an ever growing list of jobs, that’s because it is. If you are thinking of the big dollar sign, so are we! And if the description of the work involved is exhausting you, give a thought to poor old us doing all this in scorching heat! But we can see the light at the end of the tunnel. We will hopefully have everything completed and be ready to go by Saturday the 12th of January. Even Bengie is itching to go! Deck patrols are OK, but beach walks are better!

Even though it is an expensive exercise in berth fees and repairs, it is a good investment that ensures we can confidently sail away, with our first destinations for the year being a trip down to visit friends in Port Macquarie and then a passage to Lord Howe Island, before heading to northern Queensland for winter.

Beautiful Lena Reef at the start of the Ribbon Reefs.