Shakedown cruises are typically conducted to test new vessels and their crew before they enter service or after a major overhaul. Well although Anui is far from new, it was a good test of her performance after spending nearly two years out of the water, and it certainly was a great opportunity for us to familiarise ourselves with her systems before going too far offshore.

Our shakedown cruise from the Gold Coast to Port Macquarie and back was a very useful as well as enjoyable time. This was about a 500 nautical miles return trip. On the way South we anchored at Byron Bay, picked up a public mooring at North Solitary Island, then at Port Macquarie, before anchoring 10 miles up the Hastings River. On the way North, we picked up a mooring at Coffs Harbour, anchored at Yamba and at Byron Bay, then were back on the Gold Coast. 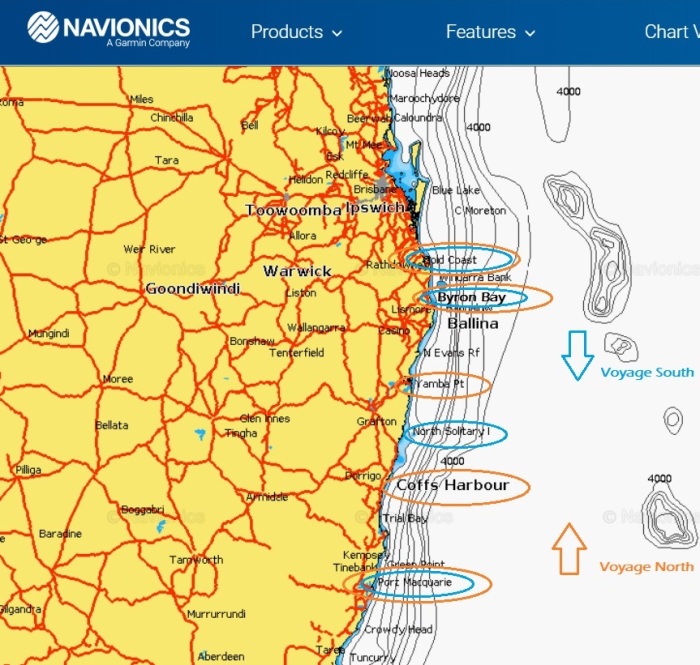 Here is how it all went: the many pleasurable moments and of course the learnings!

Sailing and more sailing, downwind as well as on a beam run, trying out the screecher, the spinnaker, the main and jib, the main and screecher, reef in, reef out, running fast, running slow, speeding up again. What a hoot! And we were lucky to get photos of Anui in action thanks to Wendy and Mark on Temptress! We suspect we might be speed demons: 9 & 10 knots speed is the new normal, 6 is slow and feels like a crawl!

Anui under main & screecher as seen from the deck of Temptress

There are so many things we enjoyed. We are still on a high with our gorgeous cat and probably will be for ages! We also realised how much we missed cruising while at the dock for weeks.  We really had not done much sailing at all in the previous two months and relished every bit of this shakedown cruise.

The photos gives you the highlights. Watching sea birds soaring, dolphins riding at our bows… 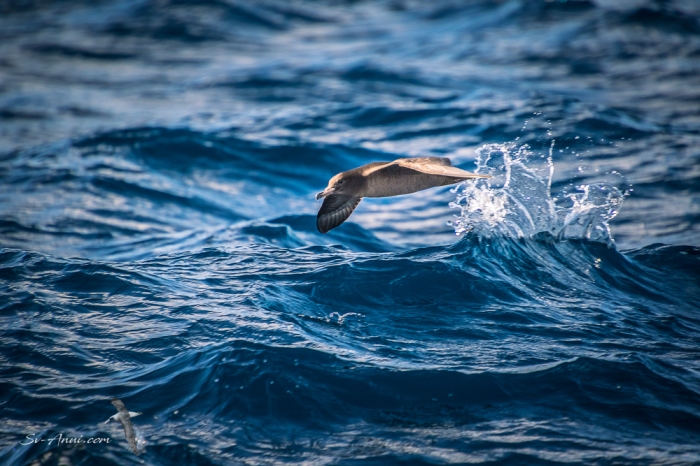 Shearwater in our wake 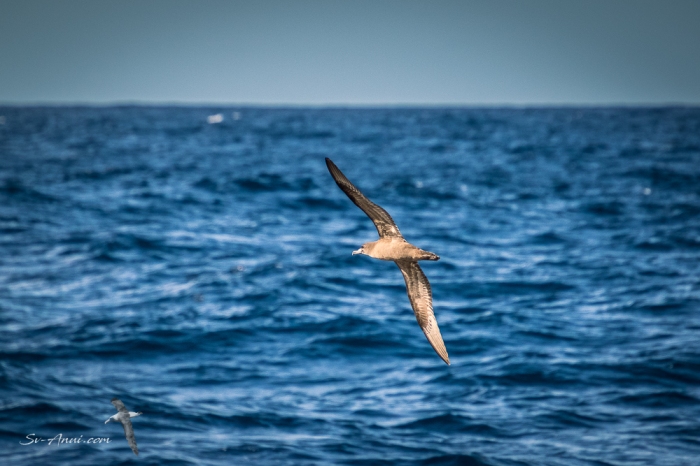 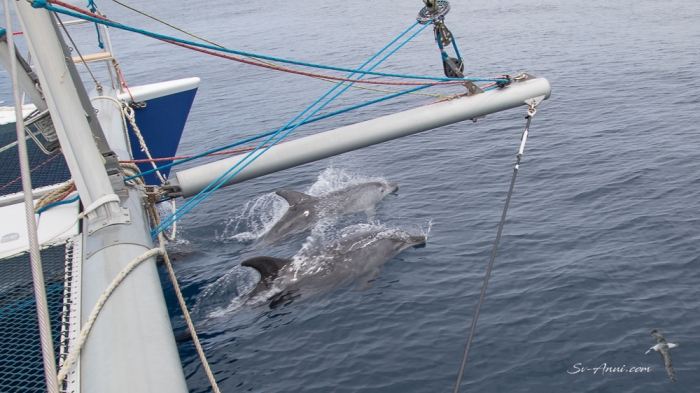 Sunsets and sundowners with friends… Thank you Lisa for showing me how to use the pano function on my iphone. Much easier than doing it on the big camera and a few panoramic shots are included in this post!

Sunset at Coffs with Elgar & Claire

Sunset at Yamba with Mark and Wendy from Temptress 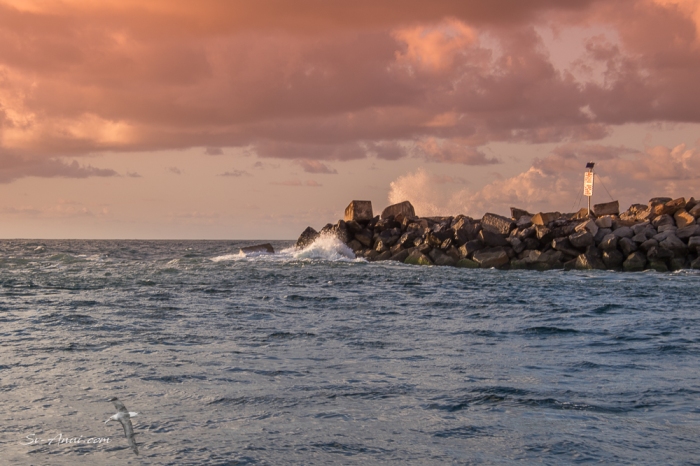 So what have we learnt? There is a lot to absorb about our new boat, but at the same time it is about applying what we know to a new vessel. So it has not been overly daunting.

One important aspect is learning the ropes, literally! With the exception of the mainsail reefing lines and halyards, the furling lines for the jib and screecher, the guys and kicker for the spinnaker all run under the bridge deck and come back to the cockpit. So do the sheets, but above deck. Thus we have to get accustomed to which jammer locks what in place. It is getting automatic for Wade, but I still have to check the labels on the jammers and the colour of the lines to know what’s what!

The array of lines, jammers and winches at the back of the cockpit – don’t pull on the wrong one!

There is an order and process for everything: start up, raising and lowering the mainsail, unfurling or furling the jib, same with the screecher and spinnaker. We are finding out when to use which sail and in what combination. 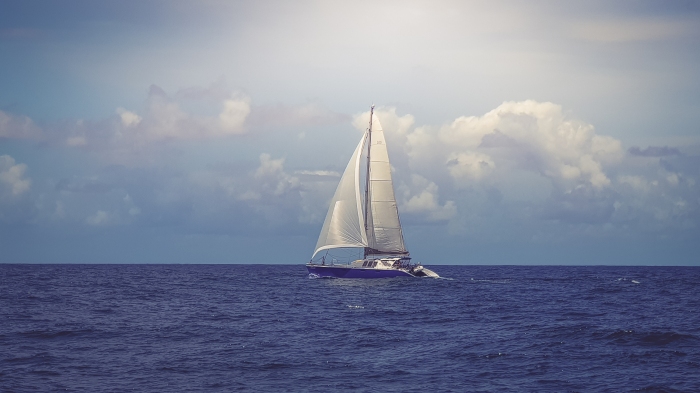 Wade has had some practice at putting in and shaking out reefs, a demanding manoeuvre with such a big mainsail on a heaving deck. I am delighted to announce he now tethers himself to Anui when venturing up there, something he never used to do on Take It Easy, much to my annoyance. I have watched him reef, but have yet to have a go at it myself.

What I have had practice at and feel comfortable about is bringing the boat to a mooring buoy. It is a calm and precise affair, especially when we use our headphones to communicate.

Anui is a wet boat at the bows when we are in full flight… lots of splashes through the nets on the return trip! It is quite spectacular really. What is not so good is when a hatch is either not properly closed or leaking! We were really distressed when we noticed salt water seeping over the floor into the bilge in our cabin. What The F…? It was disturbing although not threatening, but we had visions of a costly disaster. Where the hell is that water coming from? First step to investigating the problem: give Scott Armstrong (builder and previous owner) a call. He knew straight away what had happened! It turned out that somebody (oops, me…) had not properly shut a ventilation hatch under the bridge deck. Silly mistake that obviously had happened before, but easily fixed. What a relief!

Our cabin is dry again… phew!

But the water ingress frustrations continued with the hatch in the walk-in robe leaking a lot. We did take a few waves and salt water seeped in around the hatch. Before you all blame yours truly, it was properly shut! We had noticed the leaky hatch before, but thought we had fixed it… not so! Wade will have to take the hatch off, reset it into the deck and reseal the glass… a maintenance task while I am away in France!

One of the great aspects about shakedown cruises is that you can identify any issue that needs attention and address it before going on a serious offshore passage. And we did pick up a few things to change.

The old mainsail was a handful to hoist because of the headboard and carriage at the top. You had to manually attach the headboard to the carriage via a pin, which required you to climb the mast to above boom level and fit the pin in while precariously balanced on aluminium steps. And this exercise had to be repeated everytime you hoisted or dropped the main because our boom bag was too small to fit the assembled contraption when not in use. These are the bits we are talking about… not exactly ours, but we could not get the old mainsail and boom bag off quick enough and they were packed in the cockpit before I had a chance to get a photo! 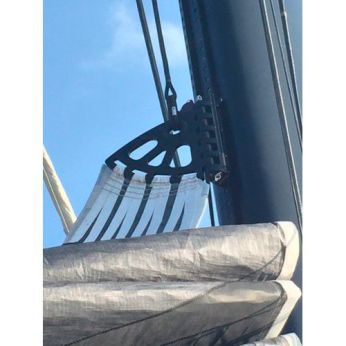 Example of a headboard 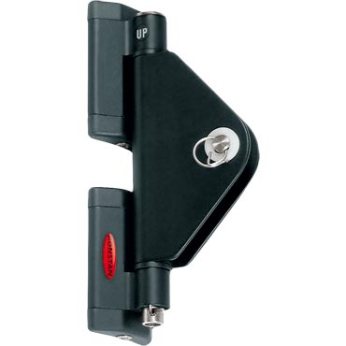 The car along the mast
So we have taken two decisions: with the new main we are getting made, Gold Coast Sailmakers are fitting a different headboard and our boom bag will be altered so it accommodates the assembled headboard and slider. It will be easier to handle regardless of who is on the sails!

We learnt about launching and dousing the spinnaker. This is an asymmetrical spinnaker, which means it behaves more like a big genoa. We first had to work out the lines before we raised the big sausage up the mast (the white sock that contains the sail). 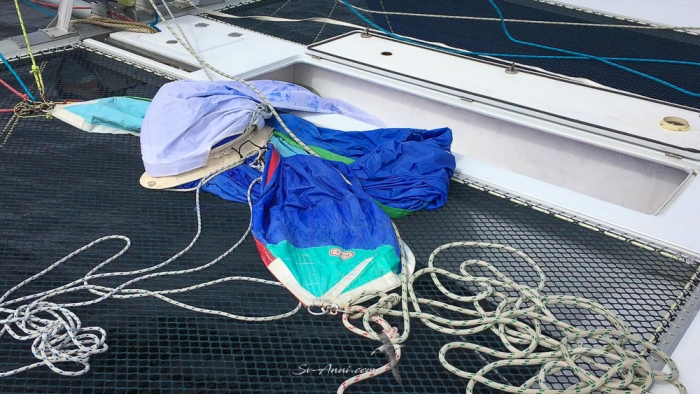 Which line goes where?

The spinnaker is in a sock which is good, but the sock is too short which is bad! The foot of the sail – the largest part – is not inside the sock when it is pulled down and the blue monster can threaten to escape before you are ready to launch it or put it away. 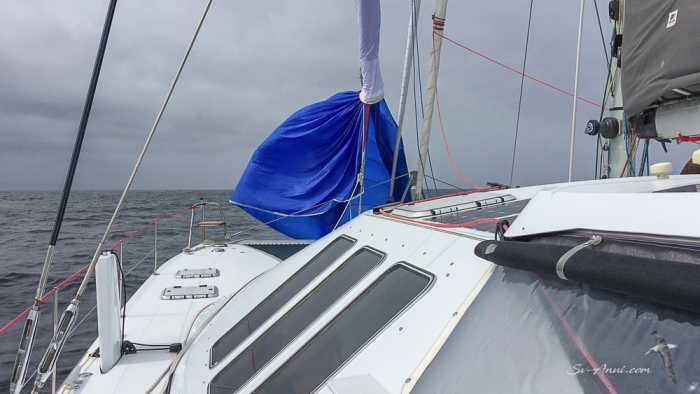 Bluey is trying to escape!

We are going to get the sock lengthened as a first step. We will also get our sailmaker to check the condition of the spinnaker because to us it looks a bit ordinary: washed out, rust stained and past its prime.

So there you have it… A fruitful exercise which will allow us to attend to a few improvements before we head off to Lord Howe, but overall reinforces we have made the right choice in acquiring Anui. Can a boat improve your quality of life? You bet!