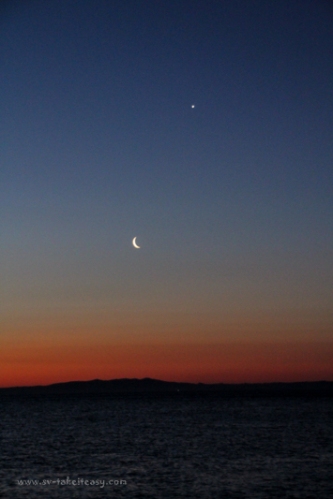 We wished them fair winds, following seas and starry nights, and that’s what they got for their first 26 hour leg!  They sailed into Eden and decided to stop there rather than try to push on before the Northerly change.  They will be comfortable at anchor overnight, and may try and motor early in the morning into light headwinds to the next port: Bermagui, some 35 nm further north.

Even though it was very cold, they enjoyed the serene feel of sailing in the sunshine, taken on a sled ride by Big Red the spinnaker, and their first night sail at sea.  The first overnighter on a passage is never restful as your senses adjust – ever so alert to what is going on around you: the noises of the boat, sorting out in your mind what’s normal and what needs attention.  Your body also adjusts to the ocean and the motion of the boat – not always good for the stomach!

When on watch it’s just you, the very starry night and crescent moon, the gentle swooshing of the sea as you sail in the darkness, the odd shooting star, the phosphorescence in the water.  It is really quite a special experience… a very cold one too when you happen to do this on a winter solstice, the longest, darkest night of the year!

But it is not all poetic.  You also get those moments when the lights of other boats test your understanding of what they are up to… like the odd fishing boat cutting across your bow at the last minute, not once, but twice, forcing you to alter course to avoid a collision, and so lit up like a Christmas tree that you can’t make out the navigation lights!  Fishing boats aren’t big on using AIS… wouldn’t want to divulge their secret fishing grounds!  They are the challenge of night sailing, but fortunately those sorts of incidents are infrequent and it was just as well it was Wade’s watch.

Here is the weather map for Monday – which unfortunately looks the same till Thursday – on the nose!  Our sailors wanted a few little breaks, but not that soon!

Next update on the Delivery Trip will be when they get a decent sail again!  Stay tuned…  In the meantime, you can keep an eye on them on Marine Traffic!