The last post in our Sea Mammals series is the elusive Dugong.  The name comes from the Malay “Duyong”, meaning “lady of the sea”.  Its slow and graceful swimming is possibly the inspiration for mariners’ tales of mermaids.  The common name for the Dugong is sea cow, no doubt because it grazes on the sea grass which forms meadows in warm sheltered coastal waters of Northern Australia.

Being a marine herbivore, the Dugong is more closely related to the elephants than to marine mammals such as dolphins and whales.  Its closest living aquatic relative is the manatee.  The Dugong is roughly the size of a large dolphin at 2.7m in length and 250 to 300 kilos, but it has a far less streamlined head, and has no dorsal fin.  It is grey or bronze in colour.  It is not particularly attractive!  The muzzle is large and fleshy, the eyes are small, and the nostrils are prominent at the end of the snout.  The pectoral flippers are short and rounded. It has a whale-like tail.

The Dugong spends most of its life in less than 10 meters of water, but needs to reach the surface every 6 minutes to breathe air through its lungs. This is how we spotted one, first hearing it blow, then seeing parts of its body appear at different times.  We wish we had been quicker on the trigger and got an image of the Dugong fully visible as he surfaced, but we failed.

Still, we felt privileged to catch glimpses of this shy creature at Humpy Island in the Keppel Group, as they are usually found solitary or in pairs and don’t normally approach humans.   We were anchored, and one circled our boat for a while.

This gentle animal was hunted for its meat and oil for thousands of years.  It is now legally protected but the population is still in a tenuous state.  Dugongs have been declared vulnerable to extinction. 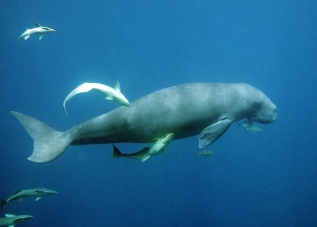