We have been out of contact for a while, but what a time we have had! Port Davey and Bathurst Harbour are the highlight of any Tasmanian sailing voyage. If you seek untamed, pristine, remote wilderness, this is the ultimate. Getting to the South West Tasmanian Wilderness from the North West coast, feels like even more of a challenge than attacking it from the Southern end.

So what have we been up to, you ask? Well, the Navionics chart shows you our playground for a couple of weeks.

Having not had any internet for over two weeks, we are in catch up mode with the reporting on our expedition. We are now at the Southern end of Tasmania, anchored in Recherche, but over several posts, we are going to share with you the wonderful sights we have been exploring in the Tasmanian South West Wilderness. Today, we take you down from Macquarie Harbour to Bramble Cove, our first anchorage in Port Davey.

We left Macquarie Harbour on Thursday 22 March, and took advantage of ENE conditions to make the 90 miles passage to Port Davey in two days. Going through Hells Gates was another calm affair, yet spectacular, and shortly after that the sails went up and off we went.

Even in calm conditions, the west coast is daunting, exposed, and few places offer shelter from the unrelenting southern ocean swell. But we had a smooth run to Point Hibbs, a third of the way down for this passage, and hid behind Hibbs Pyramid for the night – a bit rolly, but good enough for a west coast anchorage.

The run from Point Hibbs to Port Davey was one of those dream runs: fast, smooth, only two meter swell, in sunshine. The coast from Low Rocky Point onwards is spectacular, with tall mountain ranges right to the ocean. This would have to be the most magnificent and remote part of the Tasmanian coast. It was also rich in wildlife, such as seals, large pods of dolphins, albatrosses including the less frequently seen Grey-Headed Albatross and Wandering Albatrosses, and lots of other seabirds. There were also many fishing boats laying their crayfish pots!  One must keep a sharp eye out for cray-pot lines that can wreak havoc if you run over them. 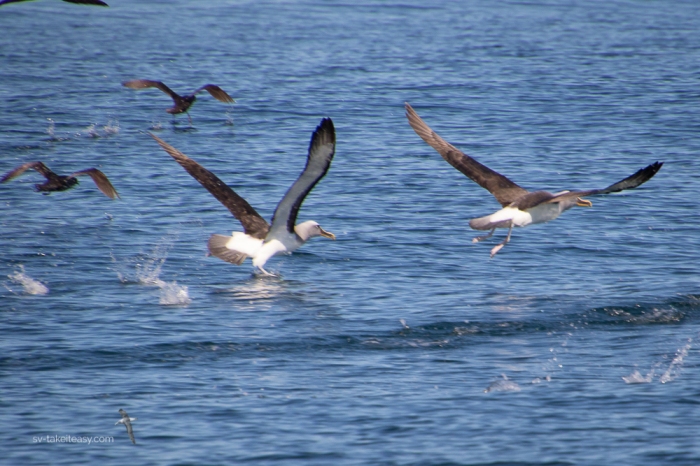 We arrived at our destination in the middle of the afternoon and anchored at Bramble Cove, where a couple of other yachts were, one of which we had met at Strahan. No sooner was the anchor down did we climb the neighbouring Mt Milner for panoramic views. We were keen to do this in clear weather, as the next few days were forecast to be rainy and windy. 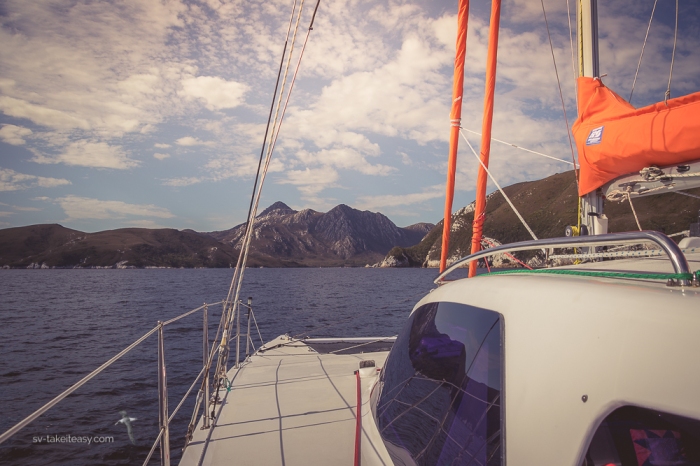 Here is a gallery of images from our passage down. The next post will show you around Bathurst Channel, which links Port Davey to Bathurst Harbour.

Coming up to Hells Gates

The rocks surrounding the northern entrance at Port Davey 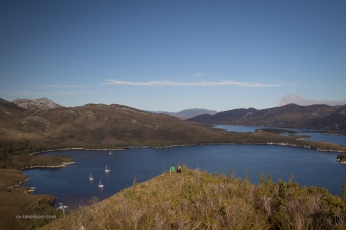 Bramble Cove from the slopes of Mt Milner 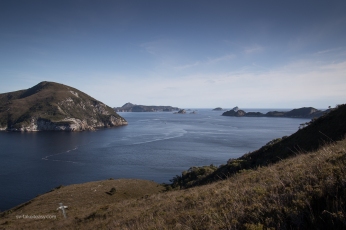 The view over Port Davey from Mt Milner

20 thoughts on “Bound for Port Davey”

Anui is out of her watery environment for some serious maintenance at The Boat Works. Mast off, new rigging, new davits set higher up, as well as the usual clean, polish, antifoul, and the various things that appear as we work on her... They say BOAT stands for Bring On Another Thousand. We reckon it is more like Ten Thousands! Everything is broken on a boat, you just don't know it yet :)⁠