You know how we had our navigation gear stolen? Well three months later, we still have on-going problems.Our Raymarine wind instruments stopped working, but this got fixed in Paynesville last week. Then there was our Raymarine depth sounder which had not worked since the replacement Multi Function Display (MFD) unit was installed in Melbourne. Thank god we kept our old stand alone Hummingbird sounder and have been getting by with that!

We had much angst waiting for Brook, the Melbourne electronics guy, to make and send a patch lead to connect our depth sounder to the new MFD. But the blasted thing never turned up and we got sick of Brook’s lack of response, our having to endlessly chase him and getting nowhere.

In desperation we asked our Paynesville Marine Electronics man, Chris, to investigate. He has figured out why the transducer would not work: it is not compatible with the new MFD that was installed. Even if Brook had got us the patch lead, it would not have worked anyway! It pays to deal with an authorised Raymarine service agent… Lesson learnt!

So guess what? We have to buy a new depth sounder and will have to fit it when the boat next comes out of the water or more likely when we can find somewhere to beach Take It Easy!

We are now waiting for the new sounder to arrive before we go. So it is likely we won’t leave the Lakes until later in the week. And with the size of the swell out there, it might be more comfortable later!

Despite the on-going saga, we are enjoying what the Gippsland Lakes have to offer: friendly company, beautiful surroundings, gorgeous birdlife. And Bengie is pretty happy, as she can roam around at will at her favourite place: underneath the Cruiser Club House. 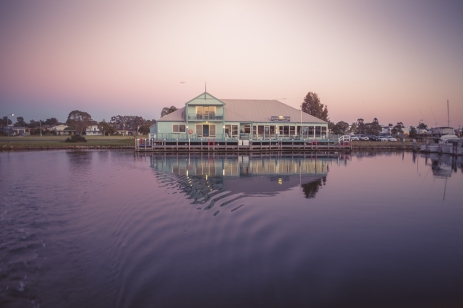 The view from Duck Arm

Bengie on the prowl

Some reef anchorages take your breath away. The exquisite colours, the feeling of calm, the gentleness of the wind. This beautiful place offshore of Bowen was new to us and is now on our favourites list. The corals have however been smashed by storms. The inside bommies are sad, but the outside reef wall is in better nick and the fish life is abundant.⁠⁠