Don’t panic, people, the Hole in the Wall is the name of our latest anchorage at Jervis Bay, which we got to yesterday afternoon.  More on this later, but first, let’s recap on the last few days.

Ingenuity at work, it’s raining heavily, but the generator is under cover!

We ended up spending two very rainy days in Snug Cove, Eden.  Plenty of wind out there – to 40kn, but calm where we were… which brings us to the subject of power production.  With the solar cells on strike, Ampy the windmill motionless, we were taking out more to run the fridge and freezer than we were putting in!  We had to bring out the generator.

The rain has stopped at last in Snug Cove!

We managed to escape ashore once we had emptied the dinghy full of rainwater and the day brightened a little with a reprieve from the rain in late afternoon Wednesday.

Thursday morning nice and early it was time to head out, bound for Broulee Bay, 80nm (160kms) north.  Despite the frequent squalls, we had a great 13 hour sail under Big Red the spinnaker in 15-20 SW to SE.  Wade broke our all time speed record: 15.7kn, hand steering because George the autopilot has a hard time with tail winds and waves, and at that speed meanders under spinnaker are not forgiving.  In fact we were going so well we thought we would keep going beyond our intended destination, a further 50nm to Jervis Bay… that is until the wind died!  So we detoured back, adding another 10 miles to the passage.

We wished we had kept going though!  Broulee was a shocker of an anchorage.  In the past it has been very enjoyable, but this time there was so much swell wrapping around the island and coming in that we felt sea sick… in bed!  So we were out of there at 5.00am Saturday morning, this time bound for Jervis Bay, 60nm (120kms) further north.

With a light Easterly breeze, we ended up motor-sailing all the way, but the sun was out so it was far more enjoyable than the bucketing rain and dark skies we have had since leaving the Gippsland Lakes. 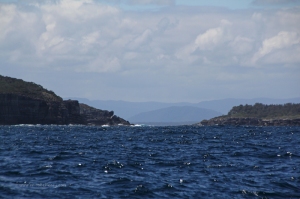 Hole in the Wall from the ocean

We are now moored at “Hole in the Wall” inside Jervis Bay, so called because there is a small gap between the 12kms of cliffs and Bowen island, at the southern entrance to the bay.  With the sun out, the aqua and totally calm water, we feel we are in heaven.  Just as well, since we will be here probably till Wednesday, while the Northerlies blow.  No sooner were we moored that we jumped in the water for a well earned swim, then a freshwater shower on the sugar scoops.  Barbecue in the cockpit for dinner, a glass of wine or two…  We have started a crop of alfalfa, mung beans and other sprouts, and today I will make some bread.  These are all the signs the holiday has now started in earnest!

Our progress northwards is fairly slow.  We have an intended destination, a return date, and the rest will just happen, dependent on the weather and the state of the sea.  It is a terribly frustrating thing to fight what you can’t control.  But it is a wonderfully relaxing thing to yield to the elements.

Here are a few photos for you.  Click on the first image to display in full screen slideshow.

The rain has stopped at last in Snug Cove!

Ingenuity at work, it’s raining heavily, but the generator is under cover!

Someone moved my cloud!

Nap time on Take It Easy 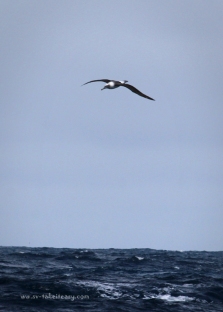 Hole in the Wall from the ocean

Hole in the Hole from the inside of Jervis Bay