After managing to successfully repair our failing water maker, we thought we had things sorted and were hoping to go to the Reef as soon as our friend Phil arrived. But things never go to plan!

Unfortunately there were two false starts on Thursday 9th May. As we were motoring out of our pen at Bundaberg Port Marina at dawn, Wade noticed water was not coming out of the starboard engine. ‘Stop’ he shouted and we did! An hour later we had changed the impeller, bought two new ones at the chandlery, just in case, and were ready to go.

Take two: Cast the mooring lines, start edging our way forward… ‘Why I am not going straight out’ I wondered with only one engine engaged, the other skipping and the boat twisting? We are out of the pen, perpendicular to it in fact, and Wade shouts “forward gear is not engaging, get us back in the pen!” “Bloody hell, how am I going to do this on one engine” I think to myself, but we get back in there, helped by Wade’s mighty leap back to the floating jetty, mooring lines in hand!  Half an hour later, Grumpy aka Kent Noble, local marine mechanic, is on the job. We are lucky enough to catch him very early in the day and after diagnosing the problem, he spends a few hours manufacturing and fitting a temporary fix for a faulty dog clutch. It will do for the season, but we will need a proper repair when we next get dragged out of the water in November!

We might be a little stressed by the day’s events, but Bengie is looking pretty relaxed!

We leave the marina that afternoon, only to anchor in the Burnett River as by now it is too late to leave for the reef.

The next morning the weather forecast is such that we decide the reef is not a safe place to head to with 30 knots south east forecast for a few days, and we instead sail to Seventeen Seventy, some 50 miles up the coast.

Dawn at Burnett Heads – We are off, but not to Lady Musgrave! 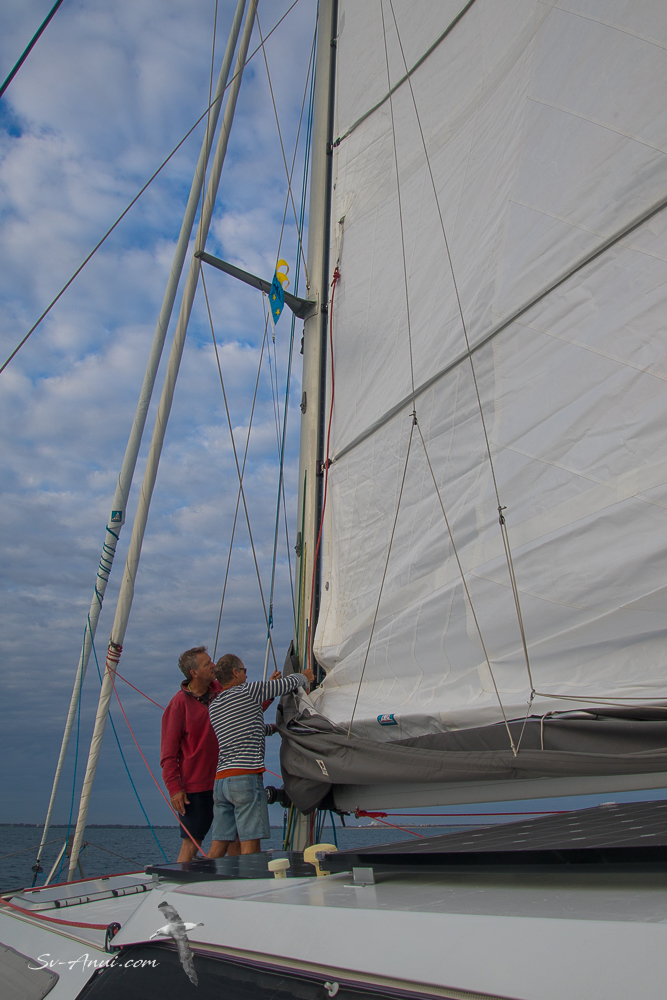 We enjoy very light conditions under spinnaker. Phil is in charge of trimming Bluey and does a better job than we would have, keeping it flying in 6 to 8 knots breeze.

We end up spending a few nights anchored in Bustard Head Bay rather than in the river at Seventeen Seventy. We are by ourselves, very comfortable, and wait there in the hope we will be able to get to the Reef early in the week. It is an opportunity to clean the hairy hulls, relax, walk ashore and explore up river in the dinghy.

We are a point of interest for the local “Pink Duck”, an amphibious vehicle that does a lap around Anui! 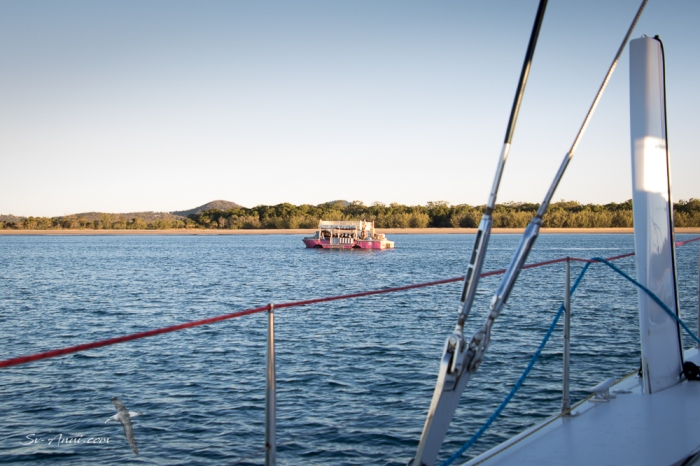 Early this week, the conditions are forecast to lighten and we hope to give Phil his first taste of the Reef. Fingers crossed we can enjoy some snorkeling out there before needing to sail to the Keppels.

The boys are checking the forecast!

It is not really going as planned, but we enjoy having Phil on board, and he seems to enjoy his time on Anui. He is a sailor, a meteorologist, and more than anybody he understands the vagaries of weather dependent activities. All is not lost though and we hope to head to Mast Head Island and surrounding Reefs by Tuesday. Wish us luck!

Blue angelfish, sneaking a quick look at the photographer before disappearing under a ledge again! The beautiful iridescent blue edging is striking underwater. We don't see these angelfish very often, so it was a delight to spot this one at Fairey Reef.⁠⁠