This long weekend is yet another example of the endless maintenance  chores a yacht generates!  Joined by Chris Guthrie, our boat building friend, we had a working weekend planned, to finish off the electrical work on Take It Easy, tackle the replacement of our cabin roof lining and carry out the annual check of our mooring.

We got on board on Thursday night to find our brand new lithium batteries were flat. That was not supposed to happen!  We had to switch the generator on and keep it running till 2am.  What a start!  The next morning we discovered the solar panels were not putting in any charge because a fuse had blown – it was much too small – 25 amps instead of 40.  This was easily fixed, but annoying.

As if that was not enough,  we turn all switches on to get the fridge, the bilge pump, and the freshwater pump working, now that we have power.  That is when another unexpected incident occurs:  as soon as we turn the water on, we hear a hissing noise coming from outside. That can’t be good!  We find a puncture in the hose leading to the outside shower.  Pretty soon, the puncture expands and the hissing turns into a full on spurt as a whole section of pipe disintegrates.  Panic!  Turn the water off!  We find that the section of pipe exposed to reflected light where it passes through the rope locker to the outside shower has become brittle.  It is totally perished.  Luckily, the pipe inside the boat is still good – imagine the flood otherwise!  We put a plug in at one healthy end and will need to replace the entire length of pipe later… another job! 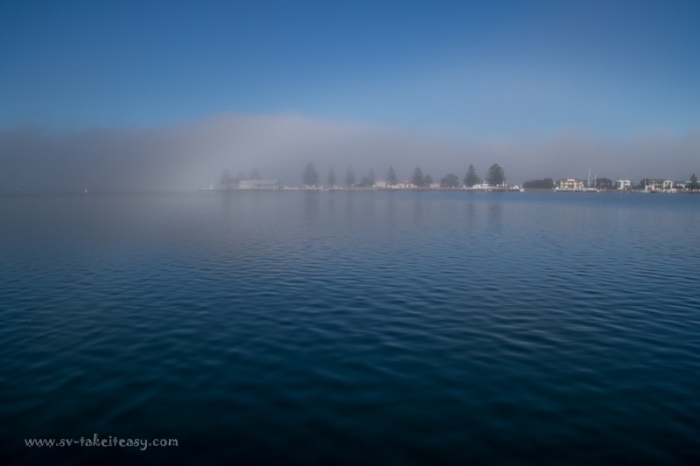 The redeeming feature to these two incidents is that it gave us something to do while waiting for the heavy fog to lift.  It was amazing and quite beautiful to wake up to thick pea soup and watch it very slowly dissipate over the next few hours.  It wasn’t until 11.00am that we could see enough to depart for Wilsons’ Promontory.  Working weekends don’t have to be spent on a mooring after all.  You might as well sail to a lovely spot and enjoy gorgeous anchorages.  We had a nice sail under spinnaker to Little Waterloo Bay, on the Eastern side of the Prom, joined by dolphins.  After a 5 hour sail, we arrived at our lovely, calm anchorage, too late to start working, but in time for drinks and nibbles! 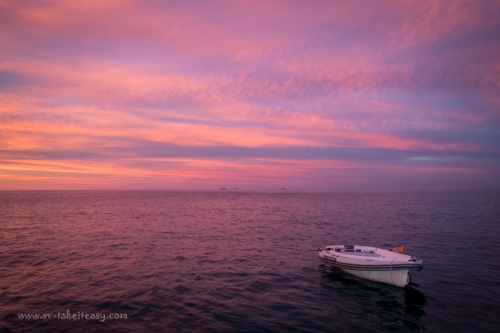 Saturday’s dawn is colourful with its purple and pink hues – but no need for “sailors’ warning”, as no sailing is planned today.  Instead, we are beavering away.

On the task list:  the big job of replacing the lining cloth on the cabin’s ceiling.  Unsightly epoxy stains had been left when the shipwrights installed the handrail around the cabin roof two or three years ago.  It had been bugging us for a while, but when other stains developed, such as mildew and numerous squashed mozzies, it just had to go!  By the time we peeled off the old lining, applied copious quantities of Exit Mould to the roof, then removed the residual contact adhesive with a glue solvent, several hours had passed and we were getting high on the fumes! 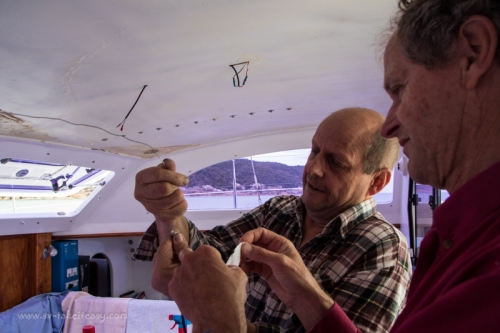 While the cabin roof was bare, our boat building friend repositioned the 2 LED lights that were in front of the table, to have them centred over the table… neatly done and much better!  We can now read at the table at night without eye strain!  Then we moved to the scary task of affixing the new lining.  We really needed a third pair of hands to do this job, so having Chris G here was helpful: him and Wade to hold the roll of cloth up, and me to spray the adhesive and affix the lining to the roof. We had to work fast to smooth out any puckers before the glue would set, making adjustments impossible.  I was in charge, based on my quilting experience!  Although there is a slight difference between sandwiching a 2.5m square quilt on a hard floor and working overhead with a 4m x 2m cloth to go on a ceiling,  any experience with adhesive helps.  It went surprisingly smoothly, even if the whole job from start to finish took nearly all day!  We now have a pristine ceiling. 🙂

By late afternoon, Chris G moved to the electrical work:  the installation of amp meters, to measure current in from solar and wind, and current out of our lithium batteries.   Lots of fiddling involved!  The job was not finished by night fall but it will be a task for Monday, as the boys are staying on board after the weekend.

No work on Sunday, instead we have a cruising day.  We took Chris G to Refuge Cove as he had never been there by sea.  For once we were the only boat there, a nice surprise.  After a quick wander to the look out and the visiting yachts corner, it was time to head off for the usual 5 hour sailing trip back to our Port Albert mooring, to drop me off… Back to work I go!

Back on the job!

The boys had a very full day on Monday but managed to finish all the chores off: electrical work, engines service, mooring check, replacement of old mooring chain, and various other bits and pieces.

As all boat maintenance jobs go, things take time… lots of time.  But when it all works out, it is quite satisfying.  I just wished we did not keep adding more tasks to the list.  You cross one out and a couple more appear!  The joys of yacht ownership! But the compensation for all the hard work is in the sensational places we get to, even on a working weekend, as displayed in the gallery.  Click on the first image to display in full screen slideshow. 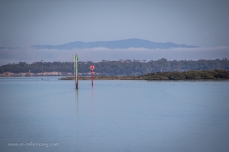 Heading out to the Prom

Dolphins at our bow

Bengie keeping an eye on the winches 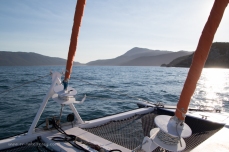 What a mess! There’s a nav station under there! 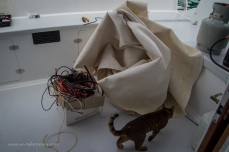 16 thoughts on “Labour of love on Take It Easy”