One of the great pleasures of cruising the Bass Strait Islands is the bird life. Many of the islands have been declared Important Bird and Biodiversity Areas.

Little Penguins are adorable. They are the smallest species of penguins in the world, measuring less than 40 cm in height and weighing only a kilo. If tourists pay a small fortune to see them coming ashore at Phillip Island, we prefer to observe them truly in the wild, and Bass Strait Islands are often a great spot to see them returning from their day’s foraging at sea. For our last night at King Island, we decided to watch the Little Penguins assemble at the back of the shore break and waddle up the beach to their burrows on dusk – our own private penguin parade, and best of all without the crowds!  Aren’t they cute?

Little Penguins have made it ashore

Little Penguins heading for their burrows

Yesterday, on the sail over from King Island, we stopped at Albatross Island, an islet which is part of the Hunter Group. When we stay “stop”, we did not anchor nor landed there, but we brought the boat quite close to the cliffs on the deeper side of the island. As the name suggests Albatross Island is a rookery for the Shy Albatross, one of only three in Tasmanian waters and in the world. This is a very special place for this threatened specie and a rare opportunity to observe these majestic birds in their habitat. But it was hard getting good shots with the boat moving a lot despite the calm conditions. Here is a taste of what we saw.

Soaring over the rookery 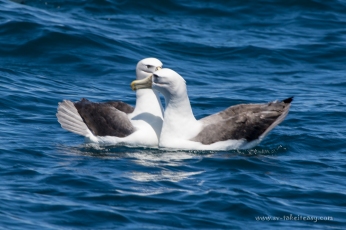 Pair greeting each other with their beak

Now in the Hunter Group

Lying off the North West of Tasmania are a group of half a dozen or so islands called the Hunter Group, the two biggest being Hunter and Three Hummock islands.  Here is the map of this next leg of our voyage, only a 30 mile passage from Grassy.

We anchored last night at a lovely cove called Spiers Nook on Three Hummock Island. As the wind shifts and strengthens over the next few days, we will move around to another anchorage on Three Hummock, then possibly to Cave Bay on Hunter Island to hide from yet another bad blow… more red and orange nastiness on the weather maps! No fisherman’s mooring this time, we are using our trusted Manson Supreme anchor!

We have had some foul weather of late on the Gold Coast, but with it comes the redeeming feature of impressive sunsets!⁠